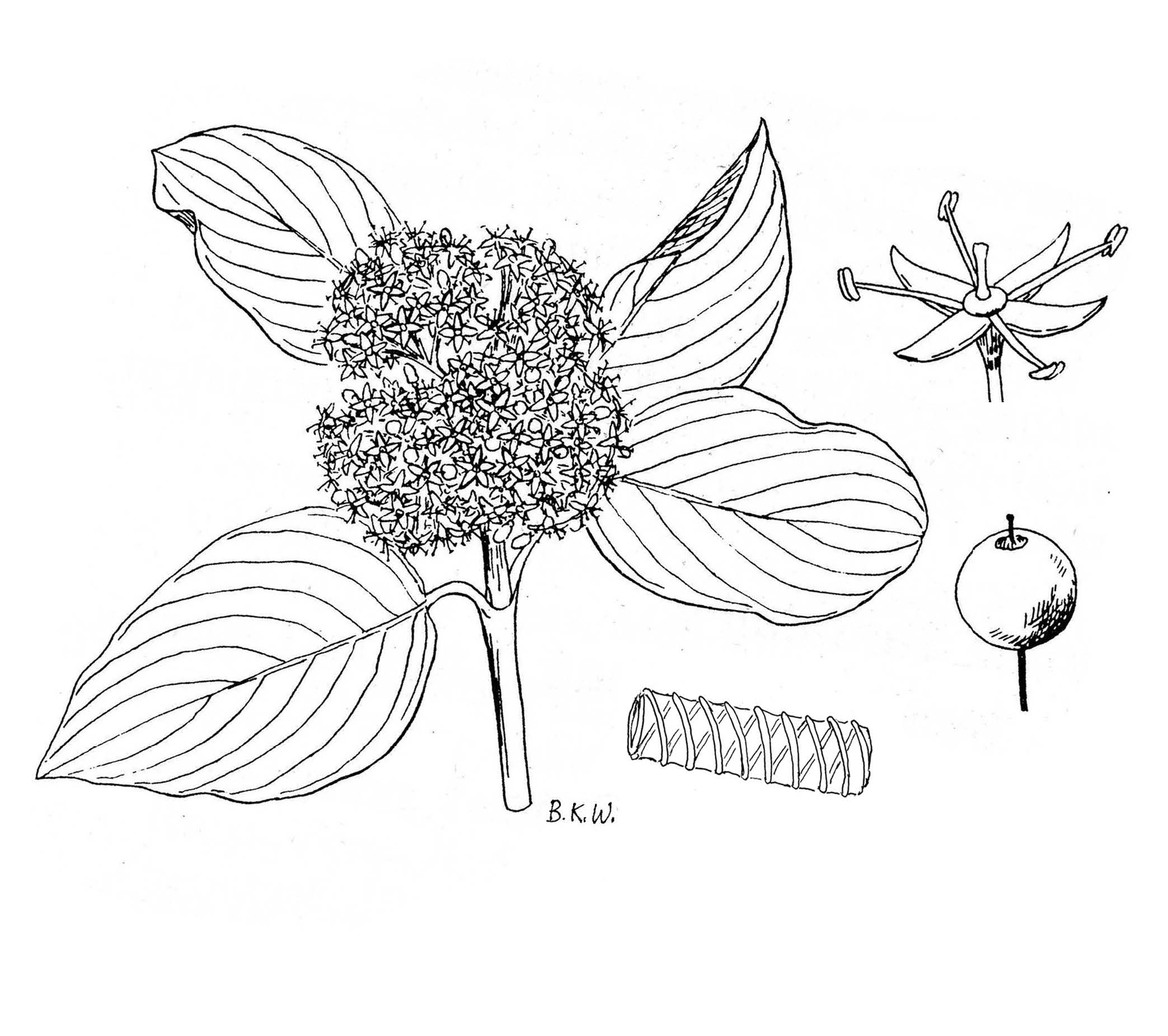 For this issue of the Obispoensis, I’m going out on a limb so to speak. Since the plant is a very small tree or moderately sized shrub, that limb will prove to be slender. The plant is the red osier, creek, or as stated in the new Jepson California flora, American dogwood (Cornus sericea).

This dogwood is the ugly sister to the “flowering” dogwoods as it doesn’t have its clusters of tiny flowers subtended by the large white to pink bracts found in its beautiful sisters. The beautiful sisters include the Sierra dogwood (C. nuttalii) and the even more famous eastern dogwood (C. florida). The individual flowers of all dogwood species are small; it’s the tight flower cluster that we see. The showy difference is only the presence of the large showy bracts surrounding the flower clusters. If you don’t have the large bracts to go on, how do you know it’s a dogwood?

Take another look at Bonnie’s drawing. Note the unusual arrangement of the secondary veins (the ones branching from the central midrib). They don’t go directly to the leaf margin but curve toward the tip where they all converge. This leaf vein pattern is relatively rare and all the dogwoods have it. I know of only one other family (Melastomataceae) that has a similar pattern and it’s tropical so we will encounter it only in cultivation.

There is also a trick that can be demonstrated with dogwood leaves that takes advantage of those really long veins. If you gently tear a dogwood leaf in two near its middle, the two halves will still be connected by thin “strings” arising from the veins. These strings come from the cell walls of a special type of water conducting cells (vessels). A drawing of a single, greatly enlarged vessel cell with spiral thickenings is shown.

A stack of these cells placed end to end conduct water and dissolved minerals throughout the leaf. The thickenings prevent the vessel from collapsing when water is drawn through it. Water isn’t generally pushed through a vessel but is sucked through. That is, it’s more similar to a drinking straw than a fire hose. We oldsters probably remember the paper straws of our childhood that soaked up liquid and collapsed before we had finished our drink. Have you figured out where the “strings” come from? Yep, they’re the spiral wall thickenings found in the inter-connected stacks of vessels.

Other leaves have secondary veins that are either too short or have vessels with different types of wall thickenings that don’t stretch, such as rings or solid wall pierced with pores.

Locating creek dogwood in the wild

So where would I look for the creek dogwood? As the common name, creek dogwood, correctly suggests, it is usually found growing along creek banks or other situations where it can get lots of permanent water near the surface. American dogwood is easy to explain as this variable species is found from the Pacific states to New England. It seems to not like the southeastern states.

Red osier dogwood refers to its thin, willow-like stems. “Osier” is another common name for willow, another group of woody plants that prefer moist to wet soils. So, red osier dogwood is simply telling us it is a dogwood that resembles (or maybe grows with or is flexible like) willows.  Dogwood leaves and flowers are definitely not “willow-like.”

When I entered “Cornus sericea” into Google, there were lots of hits. Almost all of them discussed the use of
this dogwood in landscaping. The trait they emphasized was the bright red twigs and white berries that are particularly prominent in the early fall. However, they probably aren’t a great choice for a drought tolerant garden.