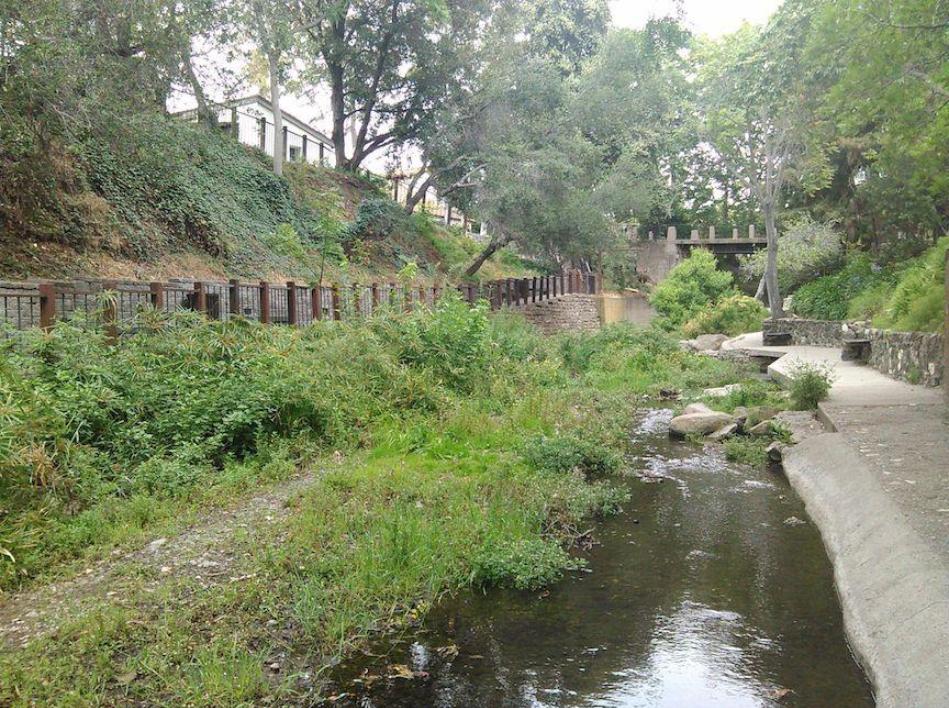 Earlier this year, SLO city officials approached CNPS with the idea of restoring the deteriorated riparian habitat, which runs through the downtown adjacent to the Mission Plaza, with California native species. Our local chapter has embraced this project with great enthusiasm.

A few weeks ago, several CNPS members met with SLO city officials, local nursery and landscape reps, and Cal Poly students, to take a look at habitat and begin the project in earnest (see photos below). Dr. David Keil led the effort by recording every genus and species of plant growing in the two-block area. This included the mature trees along the banks down to the annual and perennial plants living in the stream pathway. Dave even found a Lemna (Duckweed) species flowing in the water, of which there are actually six species native to San Luis Obispo County. At the end of the species review, as he climbed out of the streambed, he made the comment with some exasperation that the non-natives out number the natives two to one. Dave is currently preparing the final list of species for review by this working group.

Freddy Otte, the city’s Biologist and Bob Hill, the city’s Natural Resources Manager, have promised to come up with funding to help rid the creek of its invasive species. John Doyle, local landscaper, and Megan Hall, Coordinator for the Growing Grounds Farm, will join forces with CNPS to prepare a list of what species to keep and what to eliminate. The removal of unwanted plant material will take place in the fall.

Then, as the design phase proceeds, the Cal Poly Landscape Architecture Club has asked to help prepare a planting plan. Only California native plants will be used. The design will be attractive and at the same time sustainable, in both drought years and el Nino years. It will be something the city can showcase to visitors, illustrating that San Luis Obispo residents support restorations using native plants. Photo of San Luis Creek adjacent to Mission Plaza, showing invasive annuals and perennials that have colonized one of the creek’s sandbars.

Volunteers will be needed this fall to help with this project, so stay tuned. Photo of San Luis Creek flowing through downtown SLO, showing invasive perennials that are chocking out the riparian waterway.