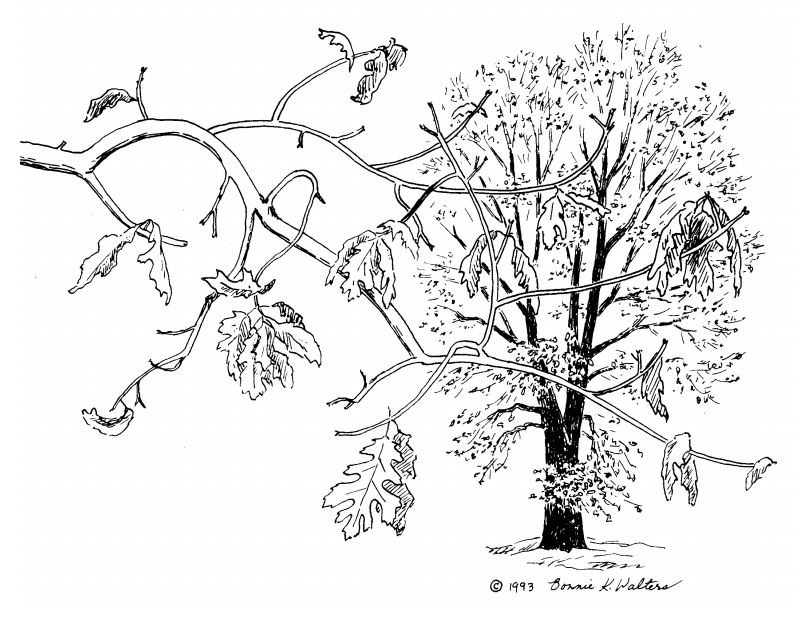 The following is an article from February 1993. It was chosen by the editor to spare me the choice since Bonnie and I were away in late October. We totally agree with his choice; we had totally forgotten about it. The repeat of this article reminds me that many species of oaks have been producing fewer and fewer offspring primarily due to habitat modiﬁcation and outright habitat loss. They are also probably being impacted by rising temperatures due to global climate change. It is also important to remember that oaks have been extremely important in the history of the human race. Various oak species have provided food, cork, charcoal, and lumber. A few species still do.

The idea for the cover was hatched out of a statement made by Bonnie while we were traveling to Yosemite Valley just before Christmas. She remarked that the dry, brown leaves and black trucks of the Sierra black oak (Quercus kelloggii) made a beautiful counterpoint to the white snow. This got me to thinking about the advantages that might accrue to a tree to keep its old, dead, dry leaves until spring of the following year. I had noticed this same phenomenon ﬁrst in the eastern black oak of my youth in Illinois (Quercus nigra). Two ideas came readily to mind. First, it might provide some advantage to the plant that would aid its survival in the Montane Mixed Coniferous Forest where the Sierra black oak most often occurs. Some herbaceous plants produce hard leaves (e.g., bracken fern, Pteridium aquilinum) that last through the winter; these have been shown to shade out seedlings of competing plants during early spring growth. Last season’s bracken leaves begin to break down shortly after the new, young shoots get a foot or so tall. However, it is hard for me to accept a similar explanation to account for trees retaining dead leaves. I can think of a number of disadvantages such as increasing wind resistance and holding more snow on the branches. Both should result in more broken branches.

Retaining dead leaves could merely be an artifact of its history. Its closest relatives are all evergreen oaks and include the island scrub oak (Q. parvula) and the coast and interior live oaks (Q. agrifolia and Q. wislizeni). This group of oaks is called the red or black oak group (Erythrobalanus) and differs from the other major group, the white oaks (Lepidobalanus), primarily by having the leaf veins extending beyond the margin of the leaf as fairly heavy, tawny bristles or spines, possessing dark gray to blackish smooth bark, having thin ﬂat acorn scales, generally taking two years to mature their acorn (exception the coast live oak) and having reddish-brown wood.

A third group of oaks is also found in California and these possess characters in combinations not found in the two major groups. All three groups include species of evergreen and deciduous oaks, but, as far as I know, only the deciduous black oaks retain many of their dead leaves for so long a time period.

Could it merely be a trait indicating a relatively recent origin of deciduous habit from the more general evergreen habit of the group? If my memory serves me right, both eastern and Sierran black oak leaves seem thicker and more leathery than one would expect for a deciduous tree.

What about the advantage of ﬂowering trees and shrubs from evergreen habit? Primarily it is due to the fact that the off season (cold and/or dry) is not always so cold and/ or dry as to preclude a leaf from functioning. There are short periods, even in the most severe of seasons, when conditions are favorable for metabolism and growth. Evergreen plants can take advantage of these short periods because their leaves are in place, whereas deciduous trees must forgo them since, by the time they could produce new leaves, the favorable period would have been long gone.

Of course, evergreen plants must pay the cost of maintaining and protecting these living leaves during times when conditions prevent them from functioning, a cost not required of deciduous trees and shrubs. In other words, whether a ﬂowering tree or shrub is evergreen or deciduous depends on the balance between cost of maintaining non-functional leaves versus the gain from being able to take advantage of short periods of moderate conditions. Thus, evergreen ﬂowering trees and shrubs tend toward coastal and/or low to mid elevations where severe conditions tend to be rare and of short duration. Evergreen conifers, on the other hand, are a different story which will have wait for another time.