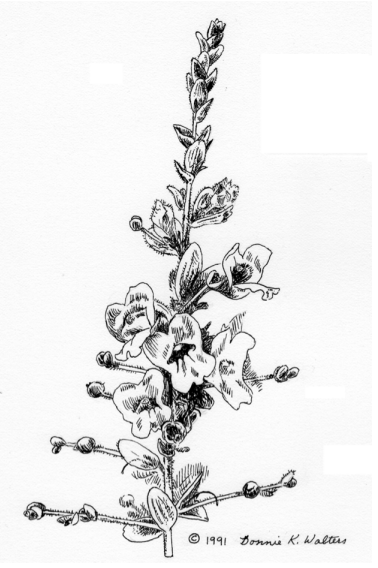 Drawing by Bonnie and article by Dr. Malcolm McLeod below appeared in the November, 1991 Obispoensis.

When you read it you will see lots of similarities with our current drought situation as well as the much hoped for possibilities of an excellent rain year. Yea, el Niño! If we get the rain, we just may have a once a decade or so treat to witness. We can only hope. Malcolm was a long-time member of our chapter who served several years as out chapter president. He served many years as our rare plant coordinator.  Malcolm mentions many names of people who came to see this rare event.  They are a whose who of local last generation including naturalist-rancher Eben McMillan and botanists Clare Hardham and Clifton Smith. In 1991, the Carrizo Plains area was not yet a National Monument but a Natural Area administered by the Bureau of Land Management and the Nature Conservancy.  It’s the presence of this species, as well as  number of other plant and animal species, that aided in it being designated a National Monument in 2001 by President Bill Clinton.

My father always said that there are two kinds of weather in California, perfect and unusual.  The rainy season of 1990-91 was quite unusual and perfect for at least one plant species.  It began as the ﬁfth year of a drought cycle.  The rains came in March.  These rains caused a number of unusual happenings to occur in the botanical world.

The oval leaf snapdragon blooms at long intervals when conditions are just right.

Many populations have apparently been destroyed. We [our CNPS Chapter] had taken a trip to Caliente Mountain in May. Several people including Clare Hardham and Theresa Prendusi were captivated with the wildﬂower displays which were present on the mountain. I at least had no inkling of the event which was about to occur. I believe Clare might have seen the snapdragon on that trip. In June, I began receiving letters and calls with accounts of the sighting of the plant on Caliente Mountain. I also had offers from several people to show me the plant or even take me to see it. I was not able to get to see it at the height of bloom but I did get to see it and photograph it before it faded away entirely. It did bloom in profusion. Dirk got some excellent photographs of it and the buckwheat which was growing in great numbers with it.

Oval leaved snapdragon is a small annual plant, simple or much branched, about a foot or a little more tall. Many glandular hairs are present. Leaves are generally oval with no or very short petioles. Flowers are about 20 mm long with an open corolla throat. The upper lip is pink, the lower lip white.

It is listed by the California Native Plant Society in [its] Inventory of Rare and Endangered Vascular Plants of California in list 1B – Rare and Endangered. The sighting of this plant this year was an event which was duly recorded. Clifton Smith from Santa Barbara Botanic Garden and Jeanette Saintz managed to get up to see it.  So did several people from the Bureau of Land Management and Nature Conservancy. We will check to see whether or not it ﬂowers next year on Caliente Mountain. If it holds true to form it will not ﬂower two years in a row or indeed until another time when conditions are right.

Dr. Malcolm McLeod was a professor of botany in the Biology Department at Cal Poly from 1979 until his full retirement in 1993 and an active member of the San Luis Obispo Chapter of the California Native Plant Society (SLOCNPS) from 1973 until he died in 2006.

Dr. McLeod was a charismatic and inspirational chapter leader that served tirelessly on numerous committees and held several offices including president, recording secretary, and rare plant botanist. He was an educator, rare plant advocate, pioneer of native horticulture, photographer, author, and scientist with an uncanny ability to recognize species long believed to have been extirpated. In 2004 his vast contributions were recognized when he became a CNPS Fellow, the highest honor awarded by the Society.