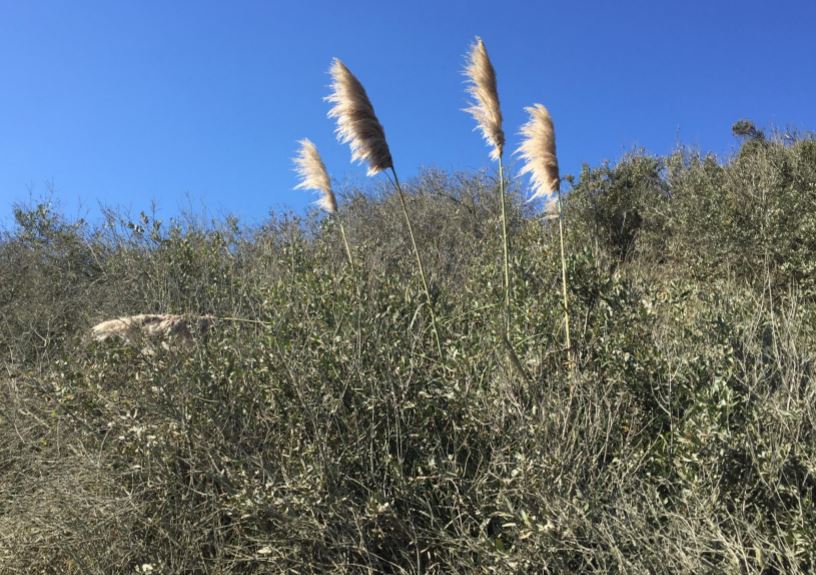 Invasive Species of the Month

There is an intense infestation of Jubata grass on the California coast. As almost everyone knows it mars the most
beautiful places such as Big Sur. On their web site California Invasive Plant Council (CalIPC) describes that Jubata grass is native to northern Argentina, Bolivia, Peru Chile and Ecuador. It was grown in France and Ireland from seed collected in Ecuador. It may have come to California from France and was first seen in 1966. Jubata grass has been called the “marriage weed” as honeymooners dragged the plumes behind their cars in Big Sur. Oy! What a mess!

Jubata grass flowers from late July to September. No pollination is necessary for reproduction. Flowers are female
only, which produces viable seed. Each plume may contain 100,000 seeds! Plants may have 1 to 30+ plumes. I started removing Jubata grass in the mid 1990’s with Jack Biegle and John Nowak, just north of Oso Flaco boardwalk.
I’ve been at it ever since and removed hundreds from the Guadalupe-Nipomo Dunes, San Luis Obispo, Cambria and
Vandenberg. I’m happy to report that from the many hundreds that were in the Guadalupe-Nipomo Dunes there are only about twenty remaining.