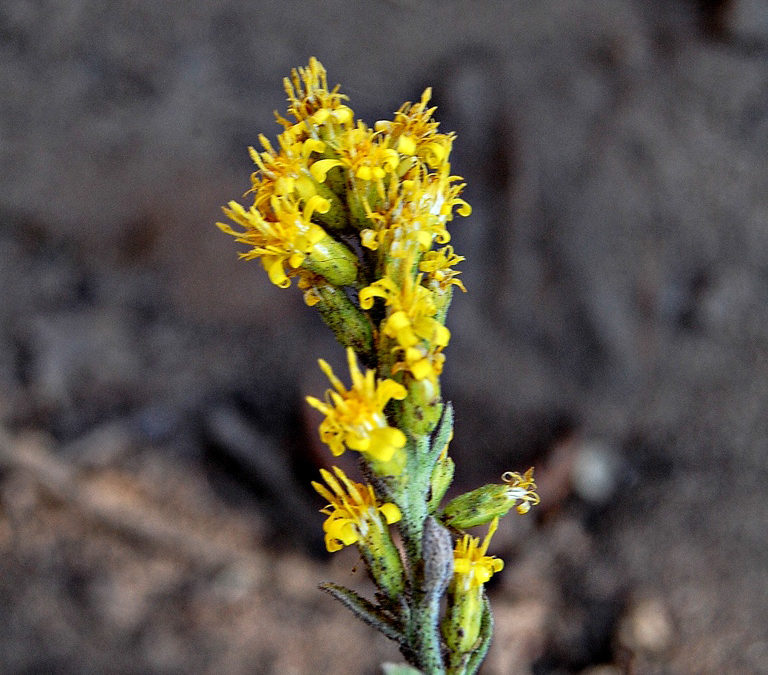 The photo by Dr. David Chipping that accompanies this note are of the California goldenrod (Solidago velutina ssp. californica or Solidago californica). According to Dr. Hoover in his Vascular Plants of San Luis Obispo County, California goldenrod is found primarily in sandy soils in the western portion of our county.. It prefers open grasslands or edges of wood and shrub lands. It never seems to me to be overly abundant. The currently recognized species (S. velutina) can be found throughout the Western North America from Mexico in to southern Canada. As might be expected of a species with this wide a range, it has been subdivided in a number of sub-specific units. And this is certainly the case. Only two of the subspecies are likely to be encountered in California (S. v. ssp. californica and S. v. ssp. sparsiflora). Subspecies sparsifolia need not concern us here as it is found primarily in Eastern California and
adjacent states. Subspecies californica is found throughout California (except the S.E. Deserts) but is especially common in the California Floristic Province
which includes essentially all of California west of the Cascade, Sierra Nevada, and Peninsular Range axis. In the Morro Bay area I’ve seen it in the grasslands around Shark Inlet.

In Dr. Hoover’s Flora this plant is recognized as S. californica. In the most recent Jepson Manual, S. californica has been reduced to a subspecies of S. velutina. How can this happen? Is it just the whim of the experts? According to the internet, relatively recent numerical taxonomic work on a number of similar, but separately described species of goldenrod indicated that they were more closely related than previously thought. That they were separately described as species should be expected. Until recent advances in communication, taxonomists tended to do plant identification studies primarily on the
plants of their immediate area. They would have had little opportunity to travel and visit reference collections far from home. They would encounter forms of plants that were readily distinguishable from other plants in their area. So why not describe them as a new species. Now, of course, taxonomists have many more tools to help them find characters unknowable to earlier workers. Mass transit and communication help modern taxonomists to know what others have done or are doing. Equally important they have computers to help analyze all this data. So why not expect lots of changes.

In my limited search of the literature and internet, I found three common names. These are velvety goldenrod in Jepson and California goldenrod or 3-nerve goldenrod everywhere else. The name goldenrod I think refers to my observation that most of them produce clusters on unbranched stems (= “rods”) topped with clusters of bright golden flowers (i.e. ‘gold bearing rods’). Most of the plants answering to the California goldenrod subspecies have densely fuzzy or velvet leaves. 3-nerved golden rod refers to the fact that a ‘few’ of the larger plants produce leaves with 3 major veins running from base to tip. I suggest this is not the best common name as it is misleading as only a few of the largest plants produce 3-veined leaves. California goldenrod is the best as this subspecies is essentially restricted to our state.

California goldenrod is highly recommended for the native plant garden. It prefers moist soils but is relatively tolerant of drier soils from sandy to light clay. It’s going to do best in sunny locations. It is attractive to a number of different classes of pollinators so it is great for those who would like to encourage beautiful, beneficial insects to visit their garden. Lastly, one internet site showed pictures of yarn dyed a beautiful yellow color using extracts from California goldenrod..
One last thing about goldenrods in general. Where I grew up, in the Midwest, there were a large number of species of goldenrods and they were exceptionally widespread and numerous. Many species could even be said to be ‘weedy’. Like a lot of members of the sunflower family, they tended to bloom in the late summer into fall. This is also when another member of the sunflower family bloomed-rag weed (Ambrosia trifida among others).

Rag weeds are unusual composites in that they produce tiny, wind pollinated flowers. Rag weeds were nearly as or more common than goldenrods but because of their tiny flowers many didn’t even recognize they were blooming. However they were blooming and they produced exceedingly huge amount of wind-borne pollen. This made rag weed pollen a major component in allergy forecasts. Unfortunately, announcers would say, “the rag weed and goldenrod pollen counts were high”. I had a botany professor who told the class that goldenrod were included in the forecasts only because it was common and
conspicuous. Goldenrods are insect pollinated and therefore would produce little pollen and that wouldn’t have been released into the air. In fact, it would be sticky so it could stick to the pollinator’s bodies.