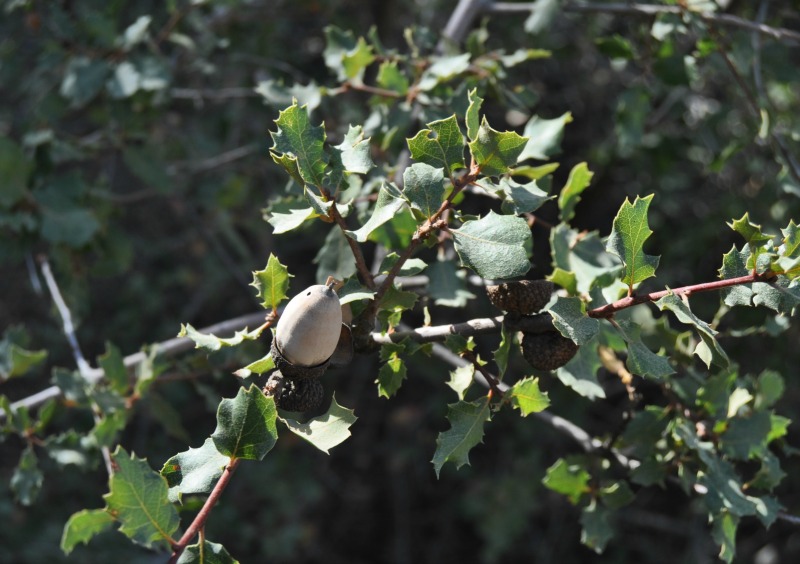 Caliente Mountain is the highest spot in the County, and forms the western side of Carrizo Plain National Monument

The oak on Caliente Mountain. is Tucker’s oak, a scrub oak with blue-green, spiny leaves that stands a little over head height but can reach to 7 meters. Quercus john-tuckeri, as it is properly called, is named after John Tucker (1916-2008), Professor of Plant Science at U.C.Davis who also wrote the oak treatment in the Jepson Manual.

Hoover in his “Vascular Plants of San Luis Obispo County” called the oak Quercus dumosa var. turbinella, and  that, at that time, Tucker called the same tree Quercus turbinella sap. californica. Added to the confusion is known hybridization with blue oak, Quercus douglasii. The oak is mixed in with California juniper, Juniperus californica, and a mix of chaparral plants including chamise. This association of oak and juniper ca also be found in the uplands of the Great Basin and Arizona, although the species are different. This is part of the great “P-J”, the pinyon pine- juniper association that is very common in the uplands of the arid west.

The “P” of the “PJ” is rare in the Caliente Range, but much more common on the flanks to Mt. Pinos to the southeast. Both oak and juniper are present at the summit. The balance between them varies from place to place, with the junipers seeming to tolerate slightly drier sites than the oak.

You can visit this interesting plant association by driving up the dirt road toward Selby Campground, and branching to the right just before the campground. The road is drivable in a vehicle with normal clearance, but is narrow in places and has some steep drop-offs. During the droughty spring of 2016 there were still a lot of flowers to be found along the road, including a lot of wind poppies (Stylomecon heterophylla) and yellow sheets of Monolopia. 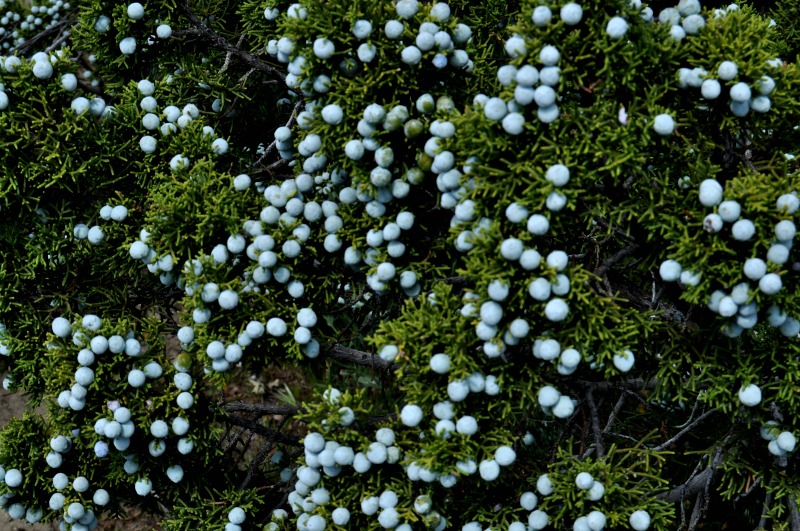 Oak’s companion on Caliente Mt. is the California juniper, Juniperus californica. It is here seen with its distinctive blue-grey berries. These are not true berries, but cones with merged fleshy scales. Berries are very bitter, and were/are used in the flavoring of gin. Gin’s name is derived from the French and Dutch word for juniper.

The stand near Shell Creek is an excellent example of the control of vegetation by slope aspect, as the south facing slope of the ridge is grass covered and has almost no trees. This can be seen as you drive east on Highway 58 toward La Panza Road.