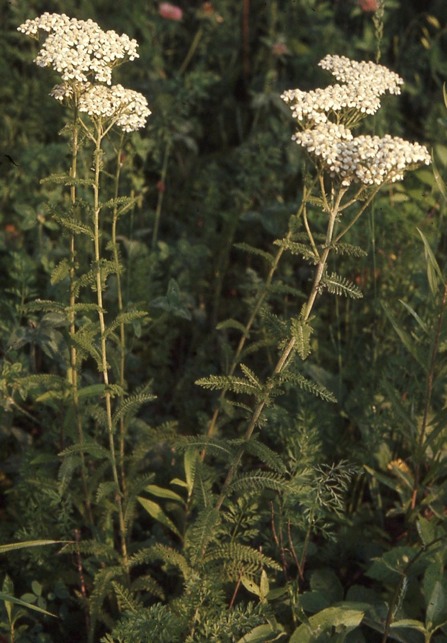 The plant discussed in this issue of the Obispoensis is one that I’ve wanted to take on for a long time, but could never bring myself to ask Bonnie to draw. Since we are using photos to illustrate it by, I think it’s time. One look at the leaves will indicate the reason for my reluctance. The leaves, which are up to four inches long and two inches wide, are divided two or three times into hundreds (thousands) of long, thin, needle-like segments which are weakly aromatic.

The species epithet (millefollium) translates into ‘thousand (mill) leaf (follia). The leaves spiral up the stem getting smaller higher up the stem. The flowers are small and clustered in heads which are themselves crowded into flat topped clusters. Most plants in the wild produce whitish flowers but occasionally one finds plants baring yellowish or pinkish tinged flowers. These have been selected for deeper colors for use in the garden.

There are many sites on the web that offer these ‘colored’ varieties for sale. The species is extremely variable which would be expected by its essentially worldwide range. It’s found throughout the Northern Hemisphere and just about everywhere in the Southern Hemisphere where humans have settled. A plant with such a wide a distribution as well as a strong correlation with human habitats would certainly be considered an introduced weed. I knew it in the roadsides and pastures of the Midwest, North East and in various weedy and native habitats here in California.

So, where is it native?

One can find any answer you want to believe on the Web. In fact, if I’d been asked where it was native before researching this article, I’d have said Eurasia. I found at least one web site that would have agreed with me. However, a majority of botanical sites as well as the Jepson Manual give its native range as “the entire Northern Hemisphere! So accepting it as a California native plant, where does it grow in California. Answer, practically everywhere there’s they can get sufficient water. Yarrow is found from sea level to over 10,000 feet in a wide variety of habitats (including weedy ones) throughout that altitudinal range. One of the better local places to find it is in our coastal dunes where it can be found spreading across the base of dune slip faces. As such it is serves as an important dune stabilizer. I should point out it is that because of its extreme variability common yarrow has had many scientific names applied to it, but recent thinking have reduced most of them to varieties.

How did it get its name?

The genus, Achillea, was applied to the plant by the Father of Taxonomic Botany, Linnaeus himself in the 1700’s. He named it in Honor of the Greek hero, Achilles. Why did he name it after a non-botanical war hero who was killed in the Battle of Troy? Again if one should look up this plant on the Web, one would find lots and lots of sites that discuss its medicinal uses, many with warnings they are not guaranteeing its effectiveness. In the 17-hundreds yarrow was considered a panacea or a cure-all. The story goes that Achilles was charmed and no weapon could harm him. He’d the protection via his mother dipping him in the river Styx when he was a baby. The River Styx was the transport medium for souls to get to Hades (the land of the dead). However his mother was afraid he would drown if she let go of him completely; so she held him by his heel which therefore did NOT come in contact with waters granting protection. So at Troy, Achilles was killed by a poison arrow which nicked his unprotected heel.

Why bring up Achilles Heel? According to the story told by my major Professor, no modern Pharmacopeia (an official list of medicinal plants) contains yarrow. I.e. after extensive testing, experts have determined that yarrow has NO medicinal value. That Achilea millefolium has no medicinal value “is in fact yarrow’s Achilles heel”.