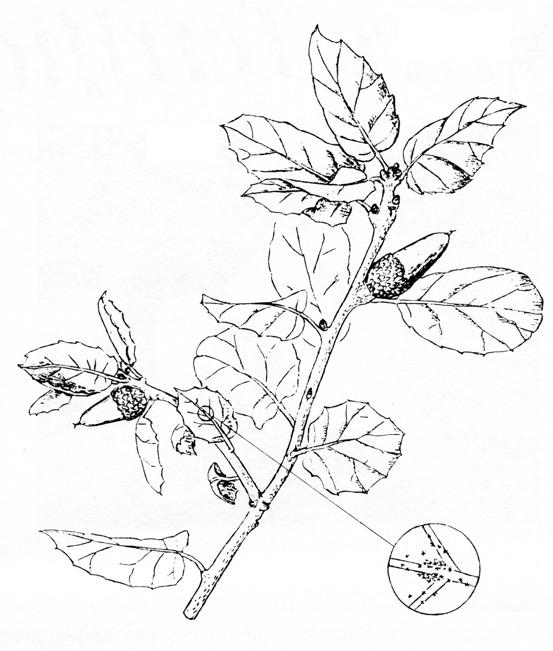 Oaks have been in the news a lot recently. Essentially all of it has been bad from the Oak’s point of view. First, there was the clearing of valley (Quercus lobata) and blue (Q. douglasii) oaks in the Paso Robles area. and then the spread of Sudden Oak Death (SOD) into our county. The notes along with Bonnie’s drawing were the Obispoensis cover back in 1998. Does anyone remember them? You might notice that Bonnie’s drawing is not as crisp as usual. This is because we were experimenting. For many years now, the pencil sketches Bonnie makes of the plants in preparation for the final inking had intrigued me. Of course they are looser and maybe even a bit sketchy. But, they have a charm all their own. Up until then, these sketches could not be used because the duplication process we used for our newsletters simply
did not have the sensitivity to pick up the subtle detail of a pencil sketch. We thought they did by then.

Why is it that people always tend to go elsewhere to find something interesting and/or exciting. I had done a “plant of the issue” for the Obispoensis for a very long time. But, I’ve never written about the most common tree in the whole of coastal San Luis Obispo County. Many of you will probably already know it from Bonnie’s picture. It is our common coast live oak (Quercus agrifolia). The early Spanish settlers in Southern California called this species, Encino after a similar oak native to Spain.

Donald Peattie in his 1953 book entitled, A Natural History of Western Trees, states, “in our own time the Coast Live Oak is the American tree best known around the world.” He makes this claim because it is the tree that is also the most common native tree in and around Hollywood, California. Thus it would be seen as a backdrop in all those outside shots in all those movies, especially ‘western’ movies done in Southern California. It is also a very picturesque tree. It is not that tall (rarely over 50 feet; the record is 75 feet), but it tends to be very wide, (up to 120 feet in diameter). It tends to branch from the base creating a number of horizontal trunks, which then bend up toward their tips. Each branch trunk can produce huge girths. In coastal habitats, such our coastal dunes, the species tends to take on a more shrubby form. Leaves and branches are mostly out away from the center, so that if one can get inside the canopy, on finds a large empty, room-like center.

The tree’s leaves are evergreen and minutely hairy all over when young. As the leaves get older, they gradually lose the hairs over the approximately 2 year live span of its leaves. A character that is often cited as the one to use when identifying this species of oak is the “hairy armpits.” The ‘armpits’ in this case are the angles between the midrib and the primary lateral veins of the leaf. In this spot, the fragile hairs are protected, and thus tend to remain longer than the hairs on the top of the veins and on the flat areas of the leaf. Thus the leaves of intermediate age will tend to have what appears to a small tuft of hairs in these vein angles or “arm pits”. As we discovered while collecting specimens to draw, don’t look at the youngest leaves; they’re sort of hairy all over, and don’t look at the very old leaves, they are essentially devoid of hairs (glabrous) everywhere. Besides being variable as to hairyness, coast live oak leaves are also extremely variable in size and shape from tree to tree and even from different parts of the same tree. Leaves on the shady north side or from within the canopy tend to be much larger than leaves on the exposed outside of the tree, especially from the hot south side. I once had one group of students collect randomly 25 leaves from the north side of a single coast live oak while a second  group collected leaves from the south side of this same tree. We then measured the length of the all the leaves and calculated their averages. We then did a simple statistical test to determine what was the chance that these to sets of leaves were representative of the same population or group. The statistical test indicated that there was much less than 1 in 100 chance that the two samples represented the same group. This means, that if we had not known the circumstances of their collection, we might reasonable conclude that the two samples had come from different trees or even different species of trees.

Coast live oaks are members of the black oak group which means they mature acorns every two years and they have the ends of their leaf veins protruding beyond the leaf margin to form harsh bristles. Other black oaks, with which you might be familiar, include the Sierra black oak (Quercus kelloggii), and the interior live oak (Quercus wislizenii). Black oaks, tend to produce more tanins in their acorns than do other groups of oaks, e.g. the white oaks which include the valley oak (Quercus lobata), canyon live oak (Quercus chryolepsis and the blue oak (Quercus douglasii). Tanins are complex compounds that are very bitter to the taste and tend to create extreme digestive blockage in animals that eat it, especially insects. Tanins are water soluble and can be leached out of a batch pulverized acorns. Native Californians would put the pulverized acorn meal into their spectacularly tight baskets and then place the baskets in a stream and let the stream leach out the tanins. I doubt if we could find a stream clean enough to do this today, or would want to incur the expense of using tap water to leach them. Yes, I think acorn meal is something we can only read about and not actually experience. Besides, many of our local native mammals, such as deer & ground squirrels, depend on acorns as a major food source. Of course, at least one acorn out of the thousands produced by a single tree has to germinate and avoid being eaten long to produce the next generation of acorns. Like many of California oaks, the coast live oak is having a harder and harder time doing just that.