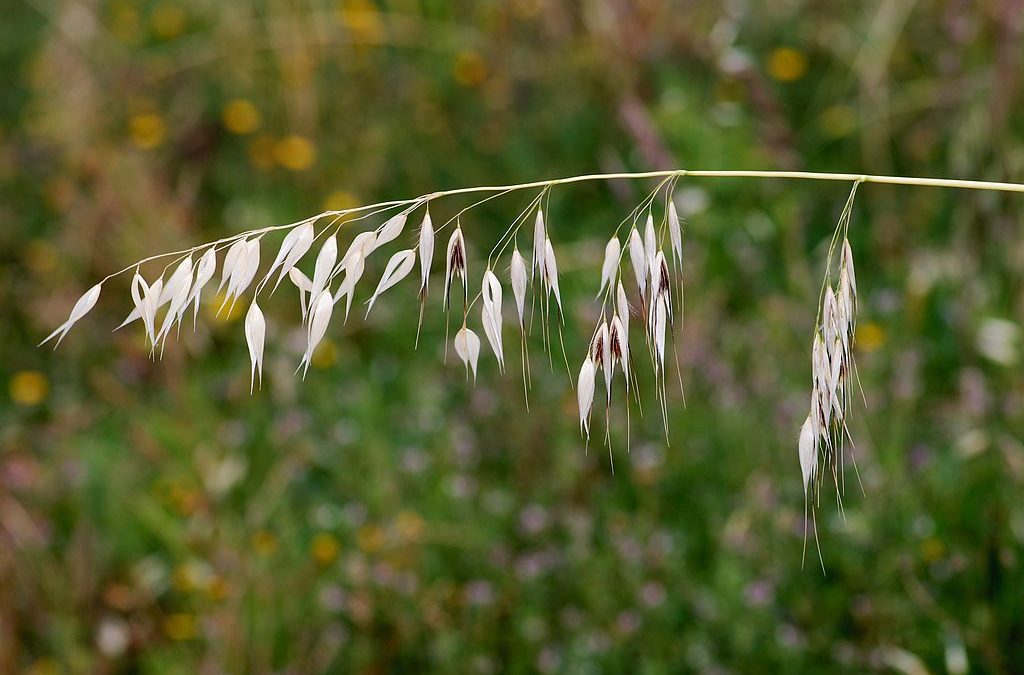 Last month I wrote about my curiosity for the origin and distribution of some of the invasive plants that have become naturalized on the Central Coast. I continue this month with exerts from historical accounts. These come from an article published in the Bulletin of the Southern California Academy of Sciences, October 1920, entitled “The Immigrant Plants of Southern California”, by Samuel Bonsall Parish, a noted amateur California botanist. In the article, the author reports historical data on 281 non-native species observed in Southern California at that time, citing reports from some of the earliest botanists who visited the area, as well as stating his own views on this subject. Here are four exerts of the article, addressing early plant introductions, two putatively during the “Mission era”, or pre-gold rush, and two thereafter.

Avena fatua, Wild oats: The wild oat must have been among the earliest introductions of the Mission era and being well suited to the conditions, have spread with rapidity. Newbery reported in 1854, “throughout central and southern California, wherever the ground was not occupied by forests, wild oats covered surfaces of many hundreds of miles in extent as completely as the grasses cover the prairies of Illinois,” and he was inclined to regard this species as indigenous. His report indicated that at that early date, wild oat was even more abundant than at present (1920), the increase of agricultural cultivation having curtailed their area. It is by way of California doubtless; the wild oat has reached other parts of the United States. It is native of the Mediterranean region, but entered this state from Mexico. [To the layperson, this implies the extensive spread of wild oat populations reported by Newberry in 1854, must have been realized within the 100 years prior, as the first of the Alta California Mission was founded only in 1769.]

Brassica nigra, Wild mustard: Abundantly naturalized as a “ruderal weed” and also in grain fields. In the coastal district, in the rich adobe soils of the hills and mesas, it often covers wide areas with a close growth 5-10 feet high, excluding all other vegetation. It is sometimes harvested for the seed. It was certainly introduced during the Mission era, and there is a persisting tradition among some Spanish-speaking Californians that the Mission fathers were accustomed to carry the seed with them and sowed it by the wayside. This seems improbable, but the fathers no doubt grew the plant in their gardens, as the young leaves are relished by the Mexicans and others, too, as a pot herb. The seeds would be scattered by the small birds, who freely eat them.

Conium maculatum, Poison hemlock: Introduced into ornamental cultivation under the name of “Carrot Fern” around 1905, soon escaping and now frequent in wet places and abundantly naturalized in willow thickets along river beds.  Widely distributed in localities throughout the state, but probably of recent introduction.

Lactuca serriola, Prickly lettuce: naturalized and common. A very recent immigrant, but here as elsewhere, its diffusion has been rapid. The species is an abundant weed in cultivated grounds, gardens, roadsides, and waste places, but they do not make their way into unbroken dry hills and mesas. While an obnoxious weed, these plants have not proved themselves so injurious in this region, as they are reported to be elsewhere. The earliest records for this state are: Berkeley in 1890, Sacramento in 1891.

Thus, intentional or unintentional, the vast array of exotic species naturalized in this state were clearly human-caused events, often out of ignorance and oblivious to what was to follow. Every introduction to California apparently has its own unique  story, how it was thought to be of ornamental or agricultural value, or how it just hitchhiked its way here. I think as CNPSers, we need to keep a look-up for unusual species and report them to the County Ag Department, if it is something new to the area.