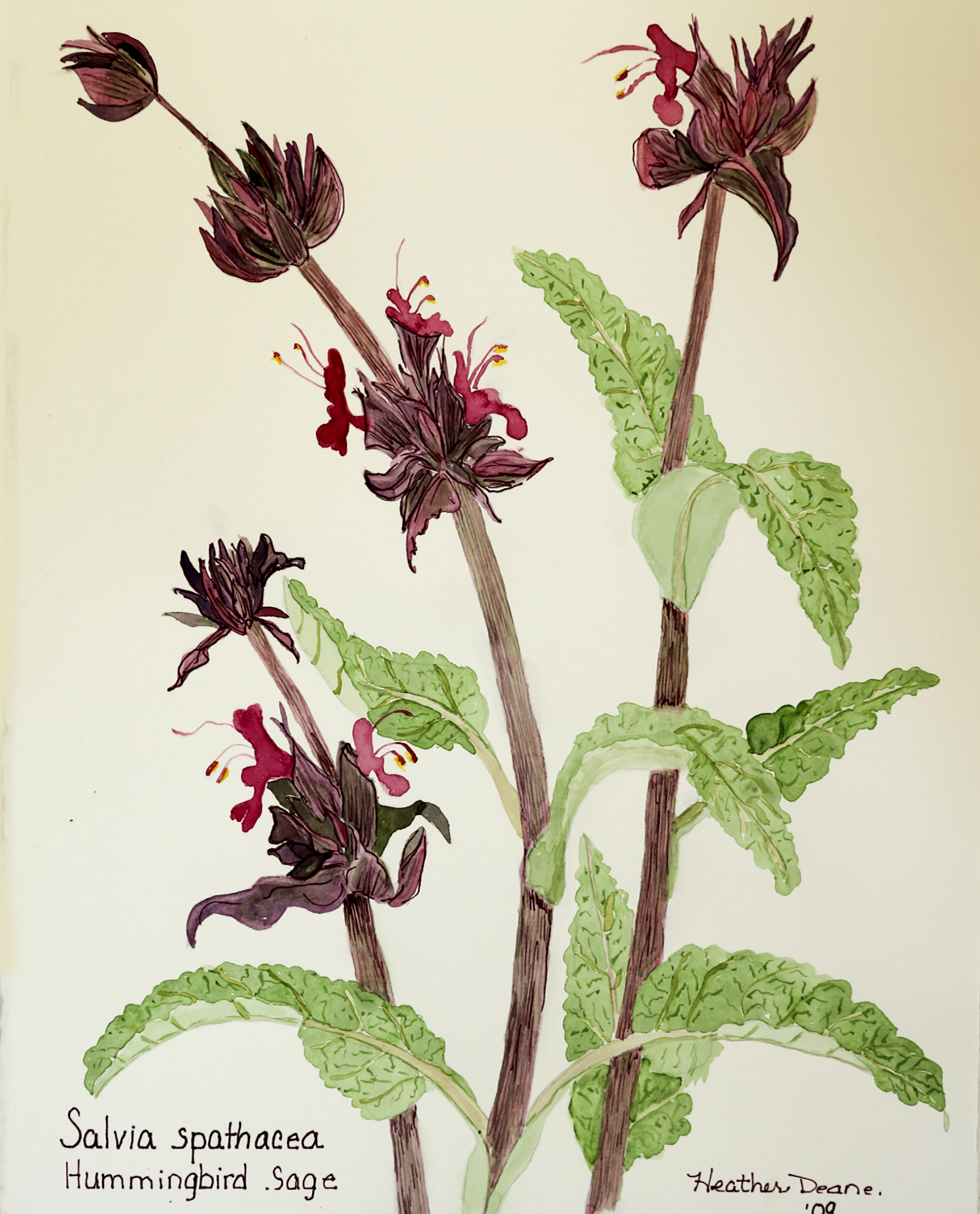 The cover of this Obispoensis is another beautiful water color by Heather Johnson. When I chose this beautiful and accurate representation, I expected that I could just go to my archive and update an article I had already written. To my surprise, Bonnie hadn’t drawn and I hadn’t written anything about it. I’m going to use the excuse that Hummingbird sage is so distinctive and so common that we took it for granted that everyone already knew it. It was one of the first California wildflowers I learned after I arrived in California from the Midwest. In our area Hummingbird sage can grow in an extensive mat. Its leaves are large (10 in (20 cm) long and 3 in (8 cm) wide). The leaf surface appears quilted. Its family affiliation (Mint or Lamiaceae or Labitae) is shown clearly in Heather’s water color. Its large red, two-lipped tubular flowers appear in our area by March and last well into summer and are borne in tight clusters; the clusters climbing upward resembling the balconies of an oriental pagoda. The two stamens and single style extend from under the upper lip in succession. The stamens appear first and after all the pollen has been removed they are replaced by the stigma at the end the style. Mint family characters also shown are the opposite leaves and the square stem. Unfortunately, the characteristic mint odor characteristic of this family is fruity (I smell lemon), but either way it’s not discernible in Heather’s art.

I’ve found three common names for this mint. They are crimson sage, hummingbird sage, and pitcher sage. The first two names are readily explainable. The usual flower color is dark red (crimson) and red is the color of flower that hummingbirds frequently visit. The name, pitcher sage, requires a little history. When I came to California in the late 1960s, the only wildflower books readily available were authored by the Southern California botanist, Phillip Munz, and emphasized Southern California common names. In those books Salvia spathacea was given the common name ‘pitcher sage’. So, we botanical oldsters probably remember it by that name. However I remember that hummingbird sage was always the name used on field trips in our area even then and the name, ‘pitcher sage’ was used for a completely different shrubby mint, Lepechina calycina, which grows in the interior mountains of our chapter area.

Based on my observations and the numerous accounts on the web, hummingbird sage has a place in a California Native plant garden, especially gardens away from the coast. It prefers partial shade, but where it doesn’t get too hot it can tolerate sun. It even does well under oaks. It even prefers clay soils rather than sand. For areas that have many deer, they seem to avoid eating it. Its  large flowers with lots of nectar make it great for attracting and feeding hummingbirds. I suspect the best situation in which to plant them would be an area that is visible, but little trod upon. Here it can even become a sort of ground cover. I found no real  references for its use in medicine other than for ailments in which its wonderful odor might be helpful. According to the book on Chumash Ethnobotany, the Cumash didn’t have a name for it although the early Spanish settlers did. Some suggested it might make a decent tea. No member of the genus, Salvia, was in any of the indices of books on poisonous plants I have in my library.