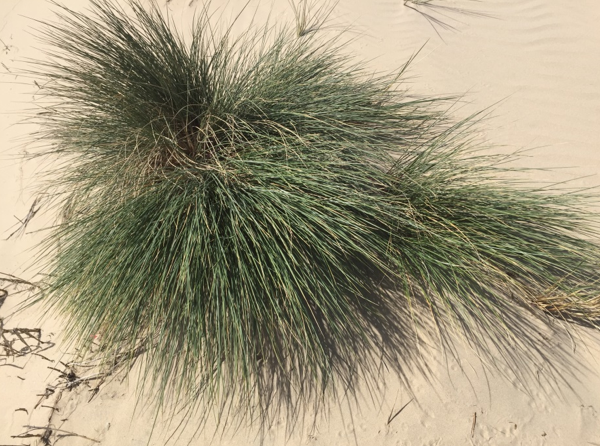 Ammophila arenaria is in the Poaceae family. It is native to northern Europe and spread from plantings from the late 1800s to the late 1900s. Andrea Pickart has written that European beachgrass is the most pervasive exotic plant species currently threatening coastal dunes on the west coast of the U.S. and is invasive in every major dune system from Santa Barbara County to the northernmost dunes of Washington and has widely displaced a native dune grass, the circumboreal American dune grass (Elymus mollis).

In San Luis Obispo County, Ammophila arenaria was planted for sand stabilization and has spread throughout the Guadalupe-Nipomo Dunes and Morro Bay. It was planted to aid construction of the La Grande Dance Pavilion in the early 1900s south of Arroyo Grande Creek. It is a perennial grass 1 to 4 ft tall, with long, rigid, tough, waxy blades with sharp tips. European beachgrass spreads from rhizomes. Ammophila rhizomes may survive in the ocean and can be redeposited onshore to create new populations. Populations may extend inland to over half a mile.

From its ability to trap and stack sand Ammophila may create tall, steep and durable foredunes that excludes other vegetation and eliminates habitat for dune arthropods, California Least Terns and Western Snowy Plovers. It is a threat to rare plant species such as Surf thistle (Cirsium rhothophilum) and Beach spectacle pod (Dithyrea maritima). Interest in controlling Ammophila began about 1980, but success was not encountered until the 1990’s. Implementation of control efforts on a large scale are underway throughout the west coast. Digging out Ammophila is labor and cost intensive and may harm archaeological sites. The most successful method involves spraying Imazapyr. This may be followed with a controlled burn to create space and conditions for native plant restoration.

Text and photos by Mark Skinner