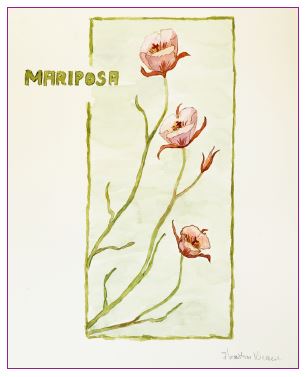 The native plant on the cover of this Obispoensis is a beautiful rendition of a species of the genus Calochortus. The painting is another of Heather Johnson’s. If you’re seeing it on the mailed version it will be in shades of gray. You can see the painting in the original spectacular color if you go to the Chapter website (cnpsslo.org). Heather identified the painting only as ‘mariposa’ and I’m not going to try to identify it to species. It often requires characters that are not present in the art work such as whether the fruit is pointed up or down. Besides, it’s the genus that’s discussed below.

Calochortus is a large genus (70 species) spread over the western third of the United States. The genus’ range extends north into Western Canada and south into Central America. That said, California has nearly half (27) of the species. Many of the California species are endemic, such as our own Chapter flower, the Obispo star tulip (Calochortus obispoensis). If you note that the species name (obispoensis) is the same as the name of our newsletter, it’s not a coincidence. Alice Meyer (our very first Hoover Award Winner) thought the species name of our endemic star tulip (found on local serpentine, i.e. Cuesta Ridge) was indicative of our Chapter area.

Calochortus is a genus in the lily family (Liliaceae). This large family of monocots is generally easy to recognize by its large showy flowers that often consists of three large showy petals and three usually colored sepals that often can be as large and as showy as the petals. Think lilies and/or tulips. However, that is not the case in this genus as their sepals are small. Like a lot of monocots Calochortus has 6 stamens and a single pistil that matures into a capsule. The genus takes these basic elements and produces at least three very distinctive flower shapes, which, in our area match the three common names most associated with this genus.

A 1998 evolutionary study (T.B. Patterson) of the genus determined that there were 4 evolutionary lines within the genus. Two of these lines correspond closely to two of the common names. These are mariposa lilies and fairy lanterns. In the fairy lanterns orglobe lilies, the flowers are nodding and the broad petals come together at their tips to form a hollow globe-like structure. Petal colors are usually subdued and lacking in conspicuous spotting. Fairy lanterns tend to be found in oak woodlands or closed woodlands.

In contrast, the mariposa lilies produce upright flowers with the petal tips spread apart so as to form a cup. The individual petals are usually ornamented with conspicuous markings. The markings make obvious a large, colored (nectary?) gland that usually occupies the base of each petal. This flower form is very widespread and I’ve seen it in the Sierras and the Great Basin. Flowers are usually arranged as seen in Heather’s painting. Obviously, Heather’s painting is of a species that would belong to this group.

Star-tulips make up the third flower form. This group usually produces less showy flowers with petals that are triangular in shape and of darker colors. In addition, the petal color is often difficult to see due it being hidden by the tufts of trichomes (hairs) that cover the upper surface. The petals are flat and all in the same plain. The flowers are usually orientated vertically so the petals resemble a 3-pointed star. Our Obispo star-tulip belongs to this group. Star tulips are often found in Chaparral or mountain woodlands. For the record, there is some confusion in my mind in the application of the common names –star-tulip and the cat’s ear mariposas.

The last evolutionary line is titled the cats ear mariposas. I’m not familiar with this name and when I tried to google it I got lots of remedies for curing problems with real cats ears. However, the species I know that were said to belong to this group had the mariposa lily flower configuration. The web noted that cat’s ear mariposas are associated with wet lands.

According to the web many of the Calochortus species were used by Native Americans for food (especially their bulbs), medicine and ceremony. One source noted that the bulbs were eaten by the Mormon settlers between 1853 and 1858 when famine threatened the new immigrants to the Great Salt Lake Valley, due to crop failures. I suspect many of the species in this genus would make excellent additions to any native plant garden, especially one that lies dormant and un-watered throughout the summer drought. The problem would be getting material to plant as few nurseries keep them in stock.