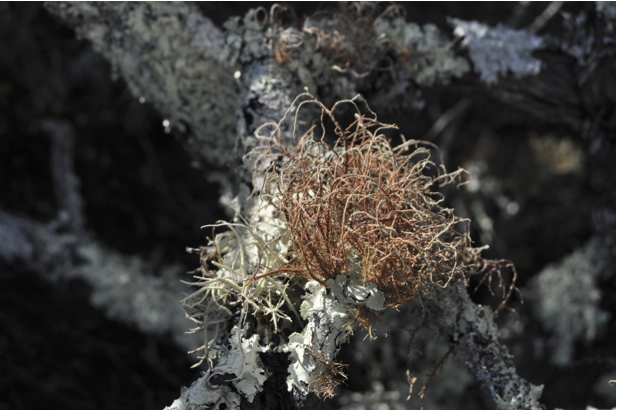 A few years ago, I became interested in lichens and bryophytes during the winter months when there were few flowers to look for. I took a class on lichen ID up at U.C. Berkeley’s Jepson herbarium, and then another at the Santa Barbara botanic garden. I highly recommend these classes for anyone wanting to learn more about lichens. Most lichens have algae as a photosynthesizing component, others use a cyanobacteria in addition to its fungal component. CNPS has helped protect rare lichens as ranked plants, so I’m including them this month in Ethnobotany Notes.

People around the world use lichens for food, medicine, dying wool, and a variety of other uses. I have read that Native American people in the Pacific Northwest had traditionally eaten a type of Bryoria lichen, which was boiled or pit roasted in a special way to reduce the toxicity from the secondary compounds. I’ve also heard of friends who made an antibiotic salve from our local Usnea. Usnic acid has long been a part of commercial herbal deodorants and skin creams. There are reports that it was used for baby diapers as well. It is estimated that 50% of all lichen species have antibiotic properties.

Some lichens were used for poison, especially those high in vulpinic acid which tends to make a very yellow lichen. Lichens were also used in ancient Egypt as part of the embalming process. Lichens are a common source of natural dyes. Indigenous people in North America made a yellow dye from the Wolf Lichen, Letharia vulpina of the Sierras by boiling it in water. Some dyes can be extracted with boiling water, but others require ammonia fermentation, which is steeping the lichen in ammonia (traditionally urine) for at least two to three weeks. In the Scottish highlands, various lichens yielded red, orange, brown, and yellow dyes. In Europe, a purple was extracted from Roccella and Ochrolechia. Litmus, the pH indicator is extracted from the Roccella lichen.

Ethnolichenology has quite a Wikipedia page. I was surprised. It is well worth looking up, if only for the 19th century Japanese painting of Umbilicaria lichen gathering. If this has whetted your appetite for lichens, you can find lichen walks and workshop information at the California Lichen Society (CALS) website: californialichens.org. Sylvia Sharnoff has also written about lichens and people.