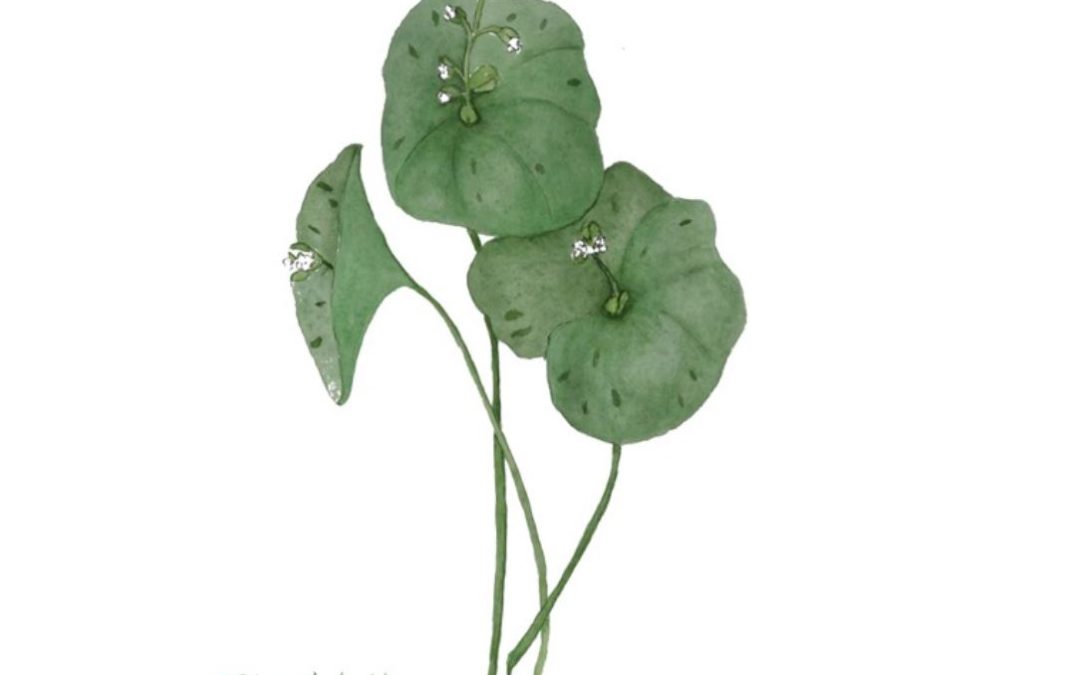 Heather Johnson has a new watercolor for us to use on the cover of this issue of Obispoensis. One might ask what is the origin of the practice of putting a different plant on the cover of each Obispoensis issue? It all started with the founder of our CNPS chapter, Dr. Robert Hoover. At the beginning of the first CNPS chapter meeting I ever attended (Fall, 1969) Dr. Hoover got up and made a presentation of what he called the “Plant of the Month.” It turned out the plant he chose to discuss was not a native plant or to even be known to exist in the wild. He discussed Franklinia alatamaha or Franklin Tree, a plant that had been collected and described from Georgia during Colonial times but after exhaustive searches hadn’t been found since. Why did he talk about a plant extinct in the wild? It had just appeared on a newly published United States postage stamp!

However, Heather’s cover watercolor is of a plant found throughout California as well as all the surrounding states. One or more of its varieties spread north into British Columbia and South all the way to Central America. The plant is seen on practically every spring field trip, but I’m reluctant to call it common. I prefer to think of it as widespread. Miner’s lettuce prefers shaded, moist, disturbed areas. It tends to be common during the rainy season and spotty other times. In the early spring, when there’s still lots of surface water, it can be found just about anywhere. I have a picture from the Shell Creek area of it growing in the crotch of a blue oak tree.

I also suspect everyone who has any experience with native plants, especially edible native plants, already knew what it is. Yes, it’s most commonly identified around the central coast as miner’s lettuce (Claytonia (Montia) perfoliata). In a book entitled Edible Wild Plants (originally, 1939) by Oliver P. Medsger, that has been in my library since my childhood, has also been called Indian lettuce, or Spanish lettuce and in Europe it’s cultivated under the name of winter purslane. All these names refer to use as a spring green. I suspect the name, miner’s lettuce, is the most recent and probably dates back only to the mid-1800s when California was over-run with miners looking for gold. I also am sure the miner’s diet was mostly tubers, grain, legumes with some meat and whisky. All of these ‘foods’ lacked enough required vitamins and minerals which would have been amply supplied by grabbing a handful of miner’s lettuce leaves on the way to a stream to pan for gold.

Heather’s watercolor is only of a couple of flowering stems which produce the leaves that were used to coin the second part of the scientific name – perfoliata. The situation where a leaf blade base appears to be passed through (perforated) by its stem is said to be perfoliate. The regular leaves are all basal and form a mound a few inches high and wide. Each basal leaf is modestly succulent and is in the shape of the spatula from your kitchen. It has a long tapering base and broad squarish or egg-shaped tip. I suspect it’s these basal leaves that were eaten.

You may also have noticed that there are two possible generic names for this plant – Claytonia and Montia. So, which is the correct genus? Also, if you go to older floras and wildflower books you will find that its botanical family seems to have changed from Portulaccaceae to Montiaceae. The name currently valid according the Jepson Manual, 2nd Ed. Is Claytonia perfoliata and is placed in the Montiaceae family. According to the Jepson Manual, the change in genus and family is referenced to a paper published in 2006. This means that the change is probably based on modern DNA sequence data as well as new technical descriptive data which was then organized using current computer classification techniques. The Jepson Manual also noted that some of the characters used required a microscope with 20X magnification which most of us don’t have. This procedure resulted in miner’s lettuce (along with a couple of other species) being moved from the genus, Montia, to the genus Claytonia which included several species of spring beauties. The remaining species in Montia remained in Montia and a new family was created for them – Montiaceae. Why didn’t the species name (perfoliata) change when the species was moved to a new genus? This is due to another rule of Botanical Nomenclature. When a species is moved from one genus to another, the species epithet moves with it unless the species epithet already exists in the new genus. If it does, the mover must come up with a new name for the species in its new location. Since the epithet, perfoliata, didn’t already exist in Claytonia, the epithet moved with miner’s lettuce’s scientific name to its new location. This rule helps keep track of name changes.