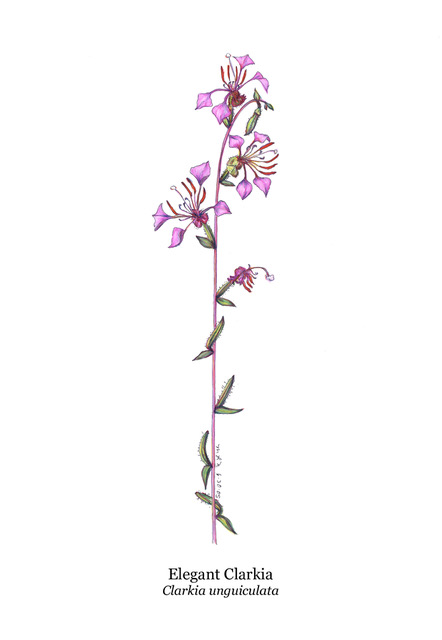 About the Artwork: The plant on the cover of this issue of the Obispoensis is the elegant clarkia or mountain garland (Clarkia unguiculata). It’s another drawing by Mardi Niles, using Prismacolor Verithin color pencils. When I first saw Mardi’s work, they were a fantastic study of the development of an inflorescence and the opening of flowers. I remember them as pencil sketches. Later, I saw them as beautiful finished watercolors. Unfortunately, our mailed chapter newsletter often has a grey-scale print on the cover.

Now let’s talk about elegant clarkia. It gets that name because its flowers are beautiful (and elegant) and the plant stands tall (up to 3 feet or more) which adds to its elegance. As can be seen, the 4 petals have an unusual shape. They have a long, narrow base and a broad triangular tip. Botanists call this shape ‘spatulate’. The sepals are fused into a disk that’s attached below the attachment of the 8 stamens. Note that only four of the stamens look like normal, functioning stamens with large anthers and the other four have tiny anthers. I don’t know if they have any function or not. Note the single flower bud shown in the picture. It is deflexed or has its tip pointing downward. This is an important character used to separate groups of species in the genus, Clarkia. Elegant clarkia is endemic to California where it ranges throughout the foothills of the Coast and Sierra Nevada ranges. It seems to be rare or absent away from hills. The distribution map for the species in California resembles a big ‘O’ with the Central Valley inside the ‘O’. I find that the easiest place to find elegant clarkia growing is on roadsides, especially roadsides passing through hilly country. It is especially noticeable growing with thistle sage at Shell Creek.

Dr. Keil’s SLO County Flora (in preparation) will be recognizing a close relative of the Clarkia ungiculata, C. tembloriensis. C. tembloriensis, as its name implies was probably described from plants growing in Temblor Range. Dr. Robert F. Hoover, in the original San Luis Obispo County Flora, has a relatively long discussion of the two species that ends in his concluding that the two species intergrade so much in eastern San Luis Obispo County that it would not be productive to try and separate them. Well, we’ll have to wait to read what Dr. Keil has to say about them when his new County Flora is available.

Elegant clarkia makes a wonderful addition to a native plant garden; especially in a flower bed set aside for annuals. I first became acquainted with the plant in Ralph Baker’s Shell Beach front yard Ralph was the acting Chapter President when I joined the Chapter back in 1970. It was Ralph’s clarkias that inspired me to see if it would grow for me despite my very brown thumb. Since it is said to grow readily from seed, I obtained my first seed at a Chapter Plant Sale many years ago. Today, it now grows luxuriantly in my front yard in San Luis Obispo adobe clay despite most of my horticultural sources recommending well drained soils. Seed from my adobe grown plants were at the SEED EXCHANGE set up before our October Meeting and will also be available at the upcoming PLANT SALE the first Saturday in November.