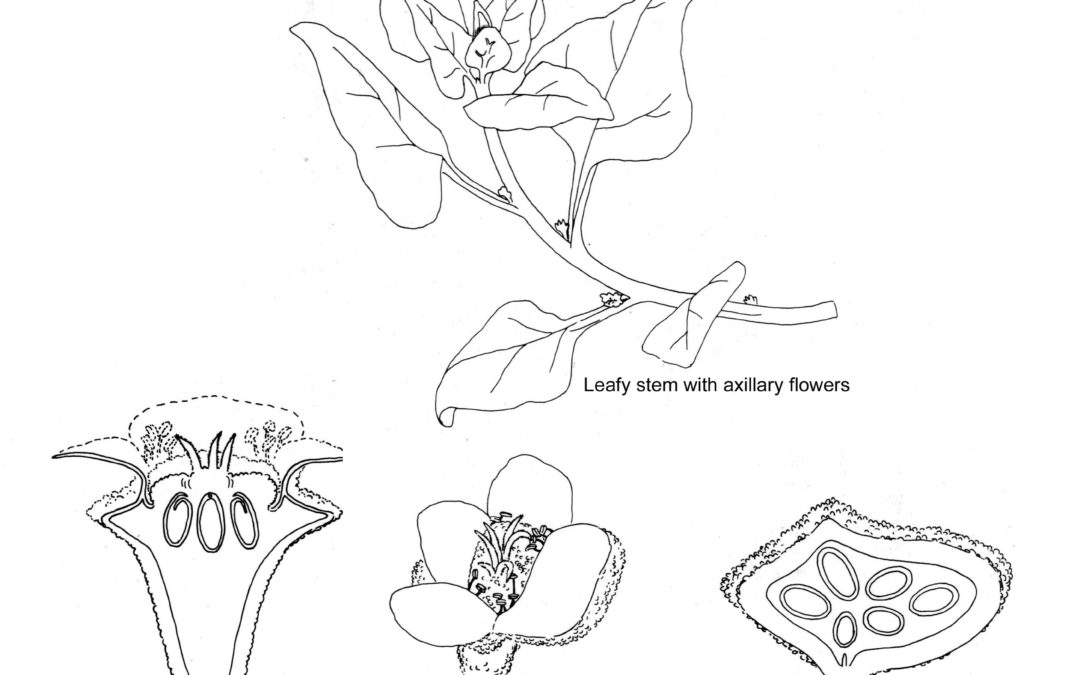 Bonnie’s drawing for this issue of OBISPOENSIS has never been used in any local newsletter. Bonnie drew it for Dr. David Keil and my plant taxonomy text back in the early 1970’s. Why has it not been used? Well, first a look at Bonnie’s drawing will indicate that the species produces inconspicuous flowers. It lacks petals, and the flowers are semi-hidden in the axils of its somewhat succulent leaves, and the species is not native to California. Its common names include New Zealand, or dune, spinach, Tetragonia tetragonoides. For you old timers like me, back in the 1970’s its most common published scientific name was Tetragonia expansa.

New Zealand spinach is considered by many to be an invasive weed. I assume we must go along with that, but my experience with it around here is that it’s not particularly good at it. It prefers slightly salty (halophilic) soils. It also seems to require a bit of disturbance. So, look for it at the upper, less salty edge of salt marsh and/or on coastal benches, especially in disturbed sites where few other species can grow. A few individual plants have been found along the edge of Los Osos Creek, west of Bay View bridge. It is especially common along the trails south of Spooner’s Cove in Montaña de Oro State Park, where it became sufficiently dense to warrant a targeted removal project. It can also be encountered as a weed all along the coast.

New Zealand spinach belongs to a family of flowering plants, Aizoaceae, that is primarily native to the Southern Hemisphere. New Zealand spinach is, in fact native to Southern Africa but has spread to New Zealand and is apparently a serious weed throughout southern Australia. Obviously, it has also been introduced into North America and Eurasia. The genus, Tetragonia, has around a dozen species and its generic name is derived from the four (tetra-) wings that are produced on the green fruit. These wings dry up and essentially disappear in the mature fruit. The inconspicuous flower displays a pale yellow color, but the flowers have no petals, only sepals as it only produces a single whorl of perianth (collective term for sepals and petals). If a perianth has only one whorl, botanists tend to regard them as sepals. These sepals, as well as the stamens are attached to the top of the ovary which makes the ovary inferior. The more famous and probably even more weedy members of the Aizoaceae are the ice plants
(Carpobrotus and Mesembryanthemum).

Wherever New Zealand spinach is found growing, its leaves have been used as a green vegetable. One web source indicated that the Magellan expedition around the world was especially happy to find a patch of it. They would pick the leaves, boil them and then dry (preserve) them for eating. It was particularly good in preventing scurvy! However, note that they boiled the leaves before eating them. The leaves contain enough oxalate chemicals to cause oxalate poisoning. Oxalate chemicals are usually destroyed by boiling. 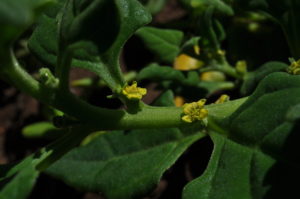 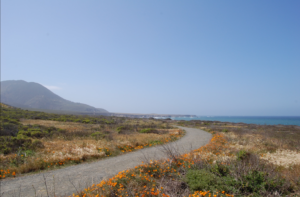