“Project A” of the Oceano Dunes State Vehicle Recreational Area

History has record of the strong local effort to protect the wetlands and lakes of the Oso Flaco area, including the work done by the ‘Dune Mother’. Kathleen Goddard Jones. Our comments are hereby confined to issues surrounding the Oso Flaco Campground and Public Access Project, also termed Project A in SVRA Public Exhibits.

Besides the obvious disruption to the natural environment of Oso Flaco Lake through vastly increased vehicle traffic which will disrupt an extremely important birding area, CNPS plant specific concerns are hereby listed and should receive thorough analysis of projected loss and mitigation in the environmental review process.

These plans for the southern entrance represent an existential threat to the rare plant species in the Oso Flaco region.

In view of the long history of labor and resources that has taken place in the protection of these species, and of the integrity of the dune scrub ecosystems, we believe that a southern entrance to the SVRA should be removed from future development plans. 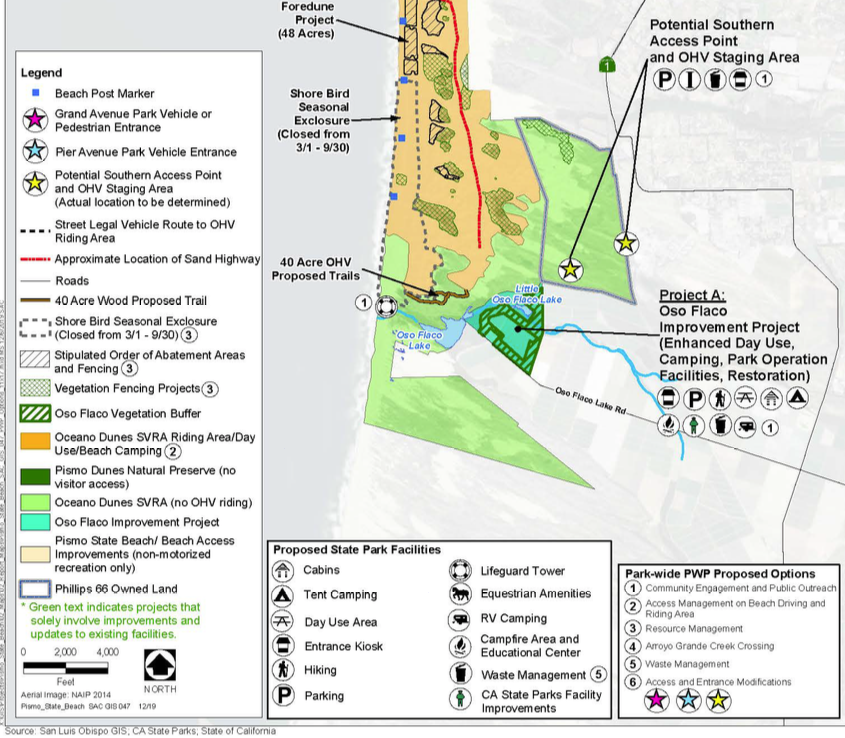 Screen shot from the SVRA’s planning documents. Note the two entry points that would carve roads across vegetated dunes on the eastern edge, and the proposed 40 acres of new OHV roads just north of the Oso Flaco Lake area. You can find project documents at oceanodunespwp.com/en/documents. 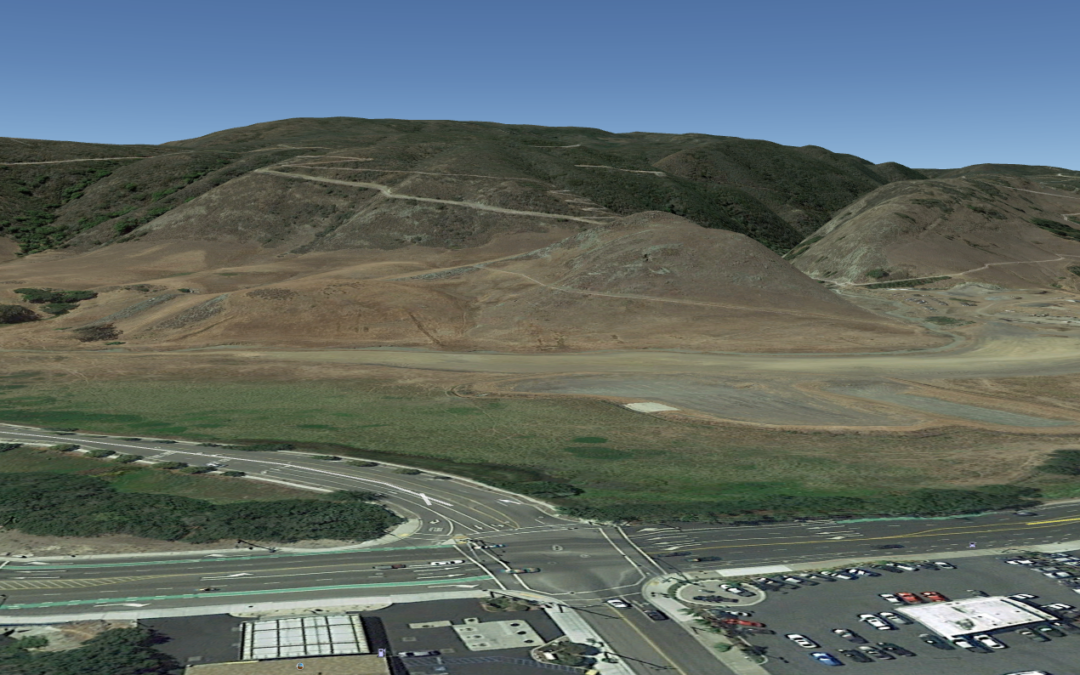 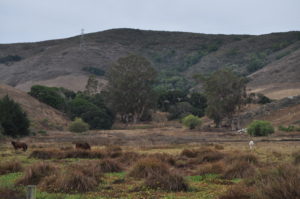 CNPS has concerns about the estimated impacts to Morro manzanita that are described in the DHCP. On Table 4-1, page 4-37, the impact of development on residential parcels greater than 1 acre is given as 1 acre per parcel. However the area within the DHCP includes core manzanita habitat south, east and west of the southern edge of the Cabrillo Estates subdivision. The DHCP shows no recognition that this parcel was the target of a large scale subdivision in 1998. This was Vesting Tentative Tract Map 1873, which was approved by the SLO County Board of Supervisors, but defeated on appeal by CNPS and others to the California Coastal Commission, which recognized that area as ESHA (Environmentally Sensitive Habitat Area).

The 1998 project was described as the division of 124 acres into 41 residential lots and 3 open space lots, the latter totaling 88 acres, and therefore indicating that the 41 lots and roads would consume 124-88 = 36 acres. The 1996 subdivision described the developable envelope and associated buffer for each lot as being limited to 20,000 sq.ft., with a cumulative footprint of 18.82 acres. When fire clearances are considered at the Wildland-Urban Interface, acreage impacts are more severe. Manzanita is considered flammable by fire departments, and vegetation clearances of a minimum of 50 feet, and as much as 100 feet could remove as much as 1.5 acres of the plant around a single lot.

It must be remembered that this was actually approved by the Board of Supervisors, and only stopped at the Coastal Commission as a violation of the local coastal plan’s protection of an Environmentally Sensitive Habitat Area (ESHA).

We have some other concerns as well. The DHCP requires a fee to be paid into a conservation fund by anyone seeking to ‘take’ of a covered species. The other species are Indian Knob mountain balm, whose populations are already protected, and two animals, the Morro Bay kangaroo rat and the Banded dune snail. The idea is to spend the collected funds on habitat enhancement, such as veldt grass removal, and the purchase of mitigation lands. One of the problems is that there are plenty of people ready to pay fees as the cost of doing business, but willing sellers of mitigation lands are hard to find. In addition, most of the core manzanita habitat is in pretty good shape, although becoming senescent, so that there is really not much mitigation that can be done, and for the manzanita, the DHCP appears to be a negative-sum game. The DHCP appears to underestimate the impacts to the plant, particularly as the protection of federally listed plants is weak relative to that of animals, and that could dictate where limited mitigation funds will be spent.

I can send you a copy of the DHCP if you email me at <dchippin@calpoly.edu>. The files can be downloaded from the Ventura office of the U.S. Fish and Wildflife Service <https://www.fws.gov/ventura/>. Comments are accepted up to November 18th.

There has not been a lot of progress on the two large projects of greatest immediate concern. Chapter members attended several meetings, one of which was at the Coastal Commission, on plans to build a southern access to Oceano Dunes State Vehicle Recreation Area. There is zero indication that State Parks is changing it’s mind concerning building a campground and access roads adjacent to Oso Flaco Lake and its special, protected dune and wetland habitat. When the Environmental Impact Report is released, we will have greater opportunity to comment. The other issue, the large development at the mouth of Froom Creek at the Los Osos Valley Rd/ Hwy 101 junction, is having issues with wetland protection, and we are still awaiting an EIR on that.

We are still awaiting the Draft EIR for the Froom Ranch development at Highway 101 and Los Osos Valley Road. We are also watching very carefully the Trump Administration orders to BLM to examine the oil leasing potential of all of its holdings. This is not a problem for most BLM lands in the County, as most are situated on geology extremely unlikely to contain oil deposits.

The county has been extensively drilled over the last century, with most being dry holes, although there is some potential in northern Santa Barbara County, the Huasna area, and some lands adjoining the Carrizo Plain National Monument. We will address any new lease sales as they occur. There are no chances of Morro Rock being drilled, as some conservation organizations have suggested.

Lastly, we are also following developments in the Sustained Groundwater Management Act regarding the protection of surface waters:

Our chapter wrote to the California Coastal Commission to support an appeal against the illegal approval by SLO County of a subdivision of a large lot situated is an area mapped as ESHA (Environmentally Sensitive Habitat Area) immediately adjacent to the Dept. of Fish and Wildlife’s Morro Dunes Preserve in Los Osos. The Coastal Plan specifically prohibits subdivision in ESHA. The site supports Morro manzanita, and is occupied by Coastal Dune Scrub, a rare plant association.
David Chipping

Read the Label to Protect Our Bees

BeeAction.org warns that any gardening product than contains one or more of the following compounds should be avoided if you want to protect our bees. These are Acetamiprid, Clothianidin, Dinotefuran, Imidacloprid and Thiamethoxam. END_OF_DOCUMENT_TOKEN_TO_BE_REPLACED

With record global temperatures, giant storms, extended tree-killing droughts, and all the other assorted disasters we are experiencing, our fears that we humans are messing up the planet are becoming true. For CNPS, we see a lot of potential threats to the flora, as if the dead oaks and Sierra Nevada pines weren’t evidence enough. END_OF_DOCUMENT_TOKEN_TO_BE_REPLACED

The CNPS Chapter Council elected to explore how we might deal with issues associated with climate change, and a statewide working group is starting up with me as Chair. One thing I would love to do is to make SLO Chapter a ‘test bed’ for different approaches to the problem. I invite anyone interested to contact me and share their views.

To kick things off I see the following key issues for our consideration:

Do we, after assessing that there are too many variables that could affect future conditions, throw up our hands and leave it to Darwin to sort out?

Another summer has passed, and there are a few clouds on the horizon.