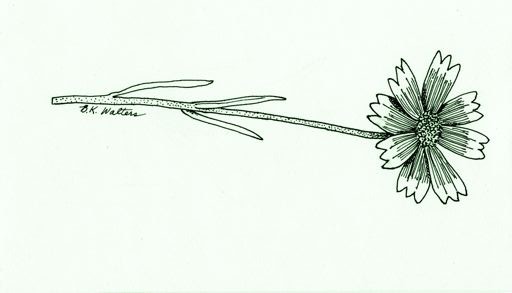 Layia platyglossa is one of our more common spring wildflowers. It can turn the hills a shade of yellow. When people talk of great wildflower displays, it is often this plant of which they are speaking. Its flowers are predominately yellow. The center is dark yellow to even orange while the bases of the petal-like structures are medium yellow. The tips are pale yellow to white. When in mass, they form medium-yellow patches as opposed to dark orange-yellow of goldfields (Lasthenia).

It is the pale tips that give this plant its common name ‒ tidy-tips. It is a member of the sunflower family, Asteraceae or Compositae. The name Compositae is an older, alternative name that has been conserved by the Rules of Botanical Nomenclature. It refers to a trait shared by nearly all members of this very large family of having its tiny flowers aggregated (composited) into flower-like clusters commonly called heads. The heads are made up of two types of flowers. In the center of the head is a tight, disk-like cluster of dark-yellow to orange flowers with their petals (corollas) formed into a tube.

These flowers are called tube flowers based on this trait or disk flowers referring to their forming that tight disk in the center of the the head. However, it is the “petals” that surround the head that give us the common name. The “petals” are actually the modified corollas (petals) of the second type of flower, the ray flower. Ray flowers are so named, I assume, because they radiate out from the outer edge of the disk. The flat strap-shaped petal-like corolla is termed a ligule and is made up of three fused petals. The ligule in tidytips generally has a medium yellow base and pale yellow to white tip. 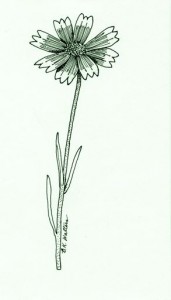 A second species of Layia is called white layia, because its pale tip extends all the way to the ligule base. White layias are common in the drier portion of our Chapter area. Dr. Robert Hoover recognized eight Layia species in the county.  However, I’m only familiar with four of them: common, white, Munz’s, and Jones’s tidy-tips.

How do you tell them apart? Well, white layia is the easiest to distinguish because its ligule is completely pale yellow to white. The other three species would all appear to be tidy-tips in a casual photograph. In order to distinguish these, one needs to get kind of technical. A hand lens would also prove to be useful, if not essential. The main character that  distinguishes the species resides in the greenish, modified leaves immediately surrounding the heads. Leaves associated with flowers are called bracts. A tight whorl or spiral of bracts is called an involucre. In the Asteraceae, these involucre bracts are given the unique term phyllaries. The phyllary tips in common tidytips are “visibly hairy.” In contrast, the phyllary tips in Jones’s and Munz’s tidy-tips either lack hairs or have hairs so short as to appear absent (puberulent).

The common tidy-tips is by far the most widespread and is easily the one most encountered. It is especially partial to well drained, sandy or rocky soils and is found practically everywhere. In contrast, Munz’s and Jones’s tidy-tips are more localized and are partial to clay soils. Munz’s or alkali tidy-tips is found in extremely alkali soils such as around Soda Lake on the Carrizo Plain. Jones’s tidy-tips is partial to soils derived from serpentine. It is known from several locations in the San Luis Obispo area.

It must be added that tidy-tips are extremely variable in many characteristics such as presence of odor, red striping and sticky hairs on the stem and the shape of individual bracts. Members of the sunflower family do not have typical green sepals. Instead of being green, they can be absent or consist of dry scales, bristles or some combination of both. Because the sepals do not look like sepals, botanists give them another name. They are called pappus. The pappus found in the various species of tidy-tips runs the full spectrum of forms with some species such as the common tidy-tips which can possess either no pappus or a pappus of thick fuzzy bristles (awns).

by Dirk Walters, illustrations by Bonnie Walters | Dirk and Bonnie Walters are long-time CNPS-SLO members, contributors, and board/committee participants. In addition to his work at Cal Poly, Dirk is the current CNPS-SLO Historian.
Page 6 of 6« First«...23456