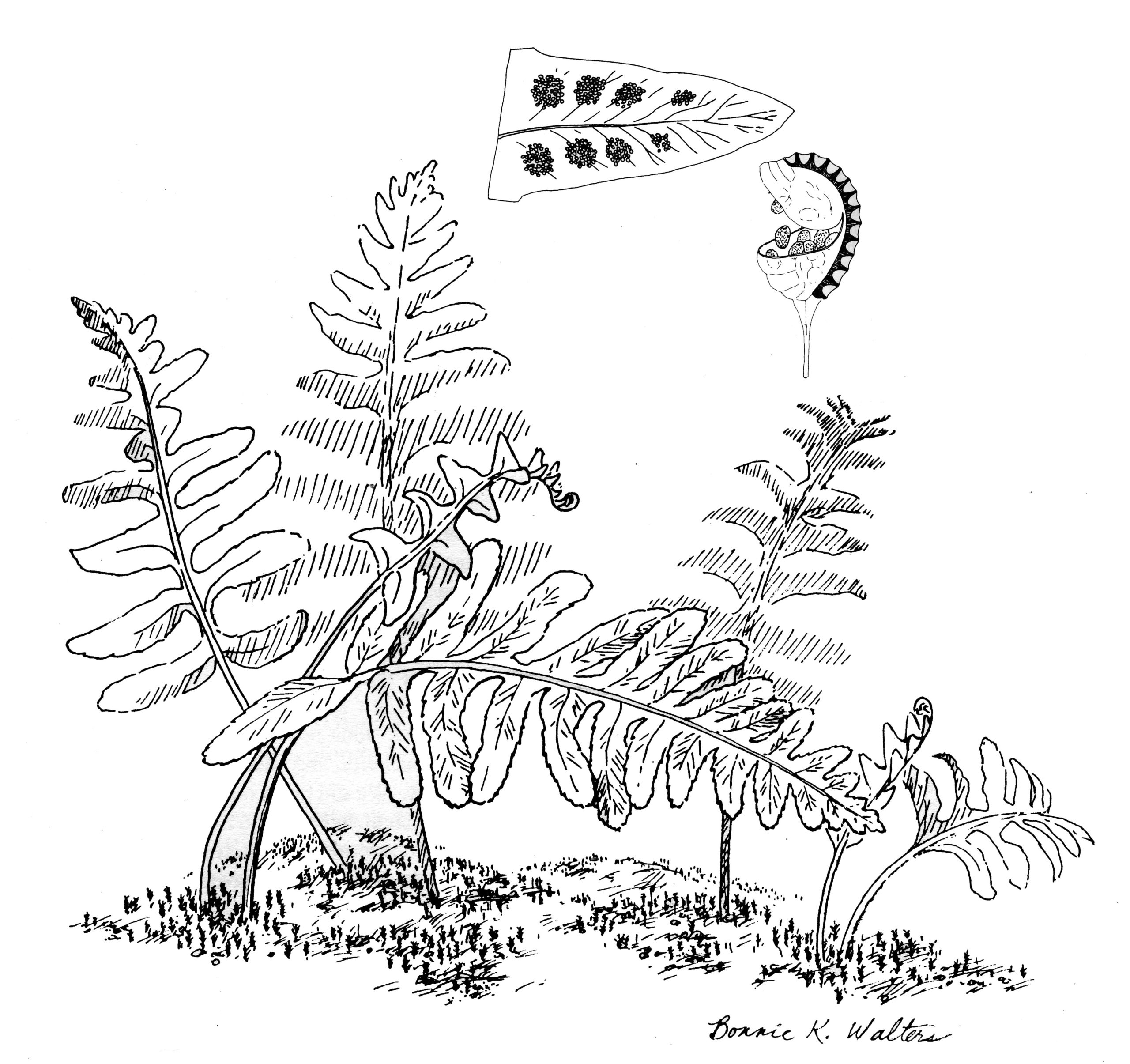 Bonnie’s drawing this time represents a fern recently found in the Los Osos Elfin Forest. The fern is the common or California polypody (Polypodium californicum). It was found by Al Normadin while scouting for his recently led trip in the Elfin Forest. It is a quite common and widespread fern on the Central Coast, where it is commonly found growing along edges or out of cracks in rocks. It is especially common on north facing slopes.

However, I was surprised to find it reported from the Elfin Forest. This is because ferns generally require consistently available soil moisture. Since the Elfin Forest Reserve’s sandy soils tend to lose their moisture and it doesn’t rain for over six months, one would not expect to find many fern species here. I suspect these particular ferns are able to do so because they occur in shade near or under the pygmy oak over-story where the oaks provide shade and extra moisture. The extra moisture comes from the ability of the pygmy oaks to condense water on their leaves and twigs from the common coastal fogs. This fog drip can add over 20 inches of extra water to that which falls from the clouds.

Even the extra moisture from fog drip might not be enough to support California polypody were it not for this particular fern‘s ability to go into an extended period of dormancy. That is, the living green leaves simply die back to the under ground stem (rhizome) and decompose during the dry months. Therefore this fern actually totally disappears from view during the rainless months of the year.

This disappearance probably explains how it could be present, yet not recorded in a species list. Then when moisture returns to the soil, the buds on the rhizome produce one to several new leaves. A note about all of our native ferns, the only visible vegetative structures one can observe without digging are the leaves. Stems and roots are all below ground. California polypody appears quickly after the first rains of autumn.

Bonnie’s main drawing actually shows two non-seed producing plants. The larger one, as stated above, is the common or California polypody or Polypodium californicum. The smaller, but more numerous is some kind of moss. I have no idea what kind. Mosses and their closely related liverworts and hornworts are usually neglected in nature books.

Neither mosses nor ferns produce seeds. Seeds are complex multi-cellular reproductive structures that consist of at least three parts. These include the outer, protective seed coat whose cells contain DNA that is identical to the mother plant, a food supply (endosperm) often consisting of cells controlled by 2/3 mother and 1/3 father DNA, and an embryo whose DNA is one-half from each parent.

Seeds allow land plants to disperse over a land environment. Mosses and ferns do not produce seeds, yet they too are land plants. So by what devise do they disperse over land? They use spores.

Spores are simple, unicellular structures that are enclosed in a thick wall. Like seeds, spores usually are capable of a period of dormancy before they can germinate and grow. In the true plants (Kingdom Plantae, which includes mosses, ferns and seed plants) all spores contain a single set of chromosomes (haploid). In all true plants, spores are always produced in a capsule-like structure called a sporangium, each of whose cells contains two sets of chromosomes (diploid). Since the cells of the sporangium are diploid and the spores produced inside are haploid, something special must happen to at least some of the cells inside the sporangium. This special type of cell division occuring when a single diploid cell (spore mother cells) divides its chromosome number in half producing four haploid spores is meiosis. All sexual organisms do this process some time in their life cycle.

The stalked sporangia in common polypody are produced in clusters on the underside of leaves. These clusters are termed sori (plural) or sorus (singular). Bonnie has drawn a portion of the underside of a leaf lobe showing several sori. A typical, single, tiny, stalked fern open sporangium is also shown.

When these haploid spores germinate, they do not produce the fern plant one sees growing in nature. They produce a tiny, barely visible to the naked eye, haploid plant known as a gametophyte. This little plant, (not shown) produces the sex organs that produce either the sperm or the eggs. These gametophytes live on the soil surface where periodically there is moisture enough to create a film of water over soil and plants. The sperm then swims through this film of water to the egg. The fertilized egg grows into the typical visible fern plant that Bonnie has drawn.

Each cluster (sorus) contains a few score of sporangia. Let’s say 60 sporangia. Each sporangium produces approximately 60 spores so a single sorus would be expected to produce 60 x 60 = 3,600 spores. Each leave produces about 20 sori, so the number of spores produced per leaf would be 72,000. Each individual fern plant produces at least 10 leaves so the number of spores per plant is now 720,000. But the California polypody is a perennial and it produces spores almost every wet year of its life. If we are conservative and say a given fern individual encounters only five wet years during it life, then during that individual’s five-year life, it will produce 3,600,000 spores.

How many of these spores must be successful in order to produce a stable population of fern plants? The answer is only two! What happens to the individuals that could have been produced from the other 3,599,998 spores? They die. If 3 or more are successful, the ferns population increases, if only one or none then the fern population decreases.