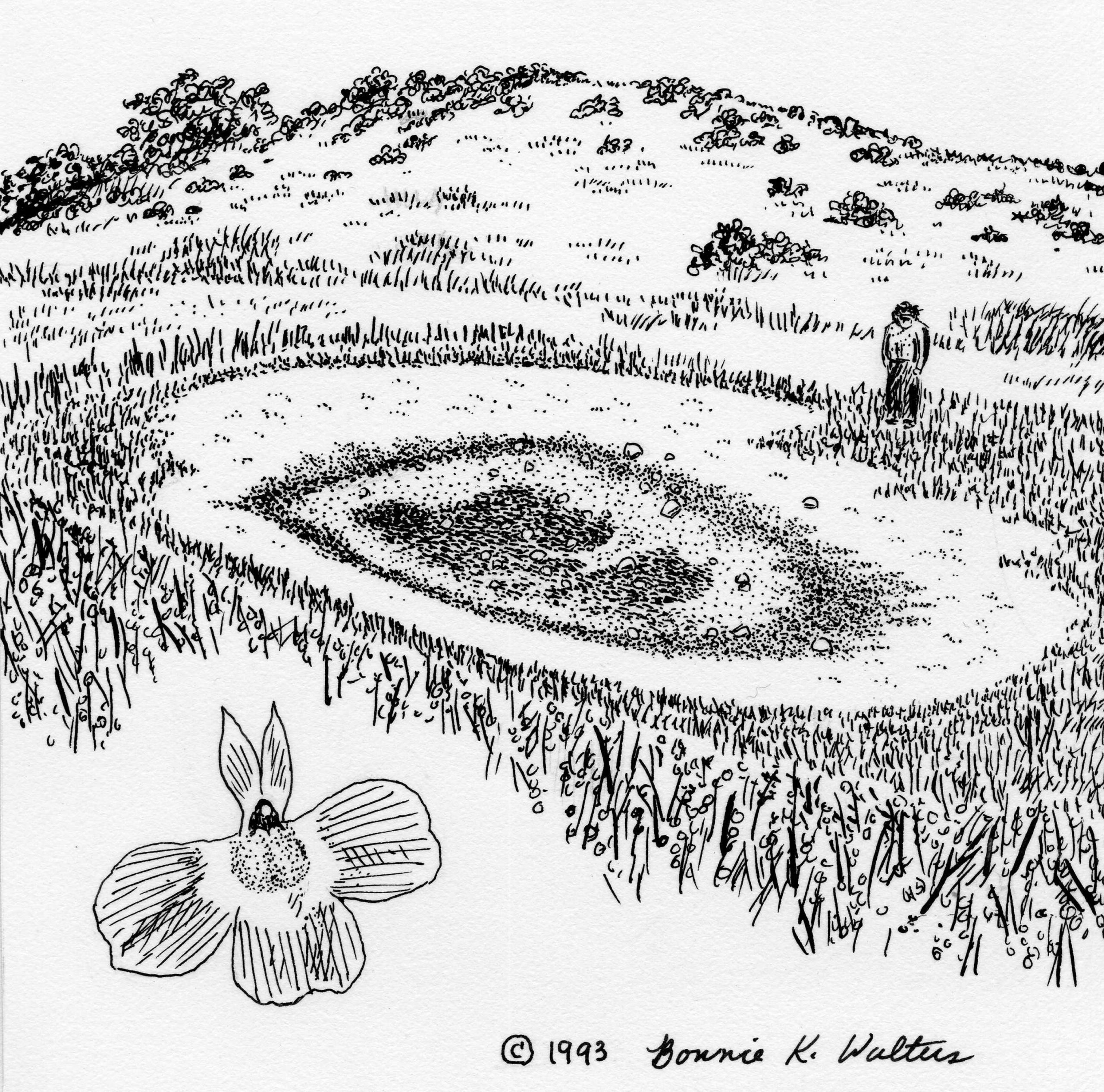 Vernal Pools occur where there is moderate to large sized “natural” depression with no outlet. The depression has to be large enough to capture enough rainfall to fill the pond to some depth. The water collects in the lowest point in the depression. There also must be an impervious layer under the pond that prevents the water from seeping deep into the soil. This impervious layer is usually a layer of calcium carbonate that forms where water seeping downward due to gravity is balanced by pull upward caused by evaporation. True vernal pools are a desert or semi-desert phenomenon. I suspect it goes without saying that not all temporary pools are vernal pools. For example, in San Simeon State Park there are extensive interlocking shallow pools surrounding small hillocks that are filled up by winter rains and are gone by summer. These are formed by animals that dig out the depressions and pile up the excavated dirt to form the mounds. This allows the animals a drier den during the rainy season. Back East, where it rains or snows most of the year, you will find temporary ponds that will last from many months. These are colonized by ordinary species more or less identical to those that inhabit the forest around them. Vernal pools will only last anywhere from a few days to a few weeks depending on their size and the amount of rainfall.

For the second Obispoensis of this year, we are doing a repeat of a drawing Bonnie did for the banquet cover back in 1993. We’re repeating this particular drawing because of the drought and in the hope that it will serve as sign that we really, really need rain! It was originally done in honor of Dr. Wayne Ferren’s (then Curator of the Herbarium at U.C. Santa Barbara) program entitled “Creation and Restoration of Vernal Pools at Del Sur Reserve near Isla Vista, California.” The vernal pool in Bonnie’s drawing is one that occurs off the road to leading to Cerro Noroeste from California State Highway 166. It is on a shelf in the otherwise steep slopes of that mountain’s foothills. This particular pool is a favorite stop for CNPS-SLO, especially when there has been enough rainfall to fill it.

It is when the vernal pool lasts for weeks that they become particularly interesting. For plants, vernal pools are a particular challenge. The first plants to appear are those that can stand total emersion in the water. These are aquatic plants that usually live totally submerged in the water. Because the water is going to last for a very short time, these aquatic plants must have an accelerated life cycle to get from germination to fruiting. As the pool begins to dry up, plants that can tolerate saturated soils begin to germinate in a ring just inside and upslope from the water’s edge. Again these plants have a difficult environment. They begin life with too much water and end up high and dry as the pool constricts away from them. The end result of this process is a series of bands produced by various species that get their start under different soil water conditions. This banding is easily visible in Bonnie’s drawing. One genus that is particularly typical of vernal pools Downingia. It is they that form a spectacular bluish band around the pool. Bonnie included a drawing of the flower of the common Downingia species found in this particular pond. It is Downingia cuspidata.

Bonnie’s drawing was taken from a photograph, lost many years ago, that was taken on a chapter field trip to Mount Able and Mt. Pinos. Although the person shown in the drawing is drawn much too small to be recognized, notes from the time indicate that it is Sybil McLeod who served CNPS-SLO chapter in many different ways. Yes, she was also the wife of Dr. Malcolm McLeod who was a past CNPS-SLO President, Historian, and for many years the Rare Plant Committee Chairman. To be a committee chair in this chapter usually means you do all the committee’s work.