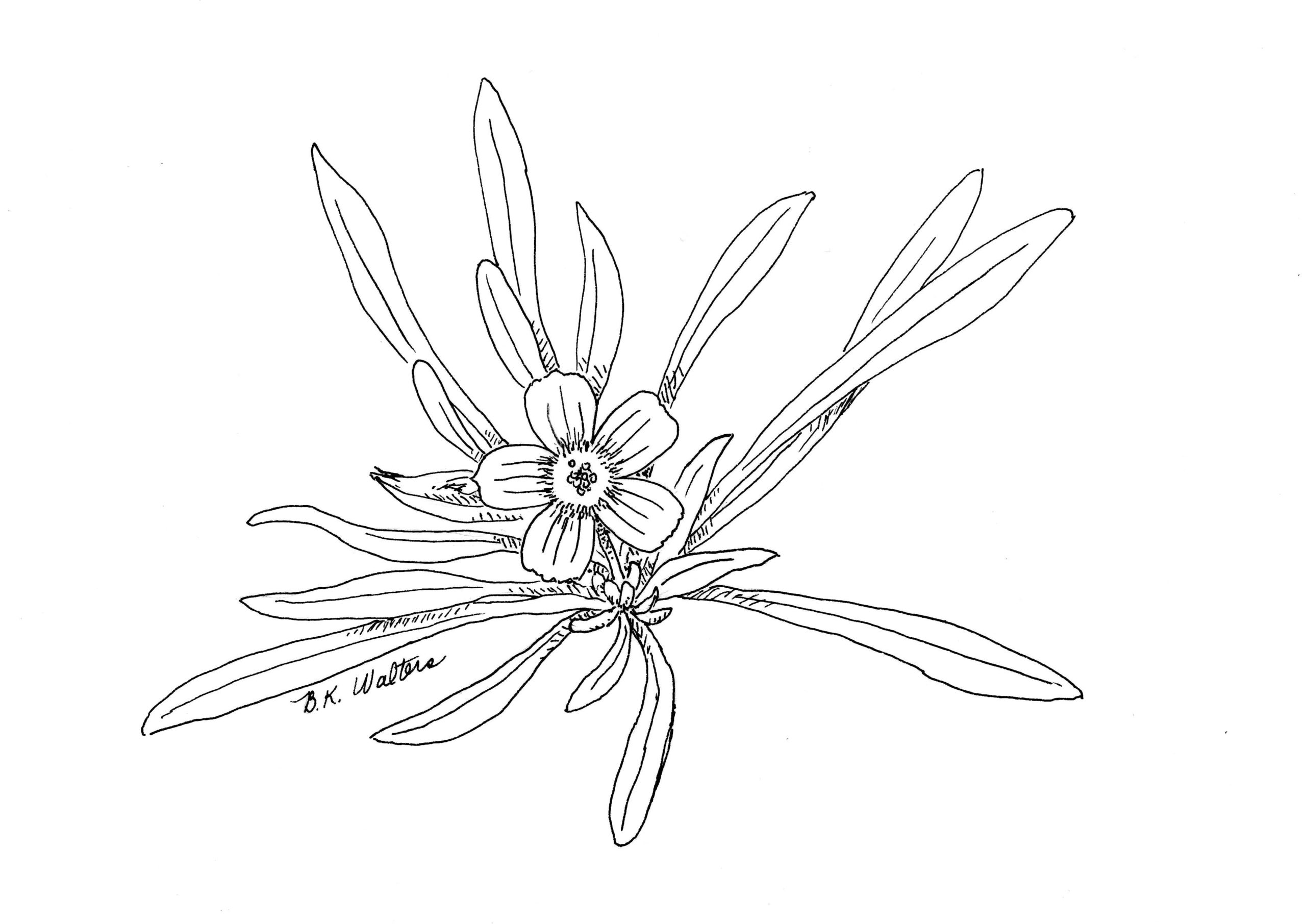 Bonnie’s drawing for this issue of Obispoensis is of a plant that is found throughout the western United States as well as spreading north into British Columbia. It has also been recorded in a couple of South American countries. It is especially common in coastal California. It is generally given the common name of red or pink maids (Calandrinia ciliata) although I’ve also seen it called fringed red maids and desert rock purslane on the web.

Although common and displaying easily seen bright pinkish-red, or is it reddish-pink flowers, it is often overlooked. This is because it tends to grow with its leaves and branches flat against the ground or flat against  surrounding plants. One sees it best when looking straight down on it. This is how the photo was taken upon which Bonnie’s drawing is based. The flower in the picture has its stamens just emerging from deep in the flower. It also has to be admitted that Bonnie’s drawing portrays a phase in the life of this wildflower that is fleeting.

What has been drawn is only the initial tight spiral cluster of leaves attached to a stem less than ¼ or so inches tall. Botanists call this a basal rosette. In order for the next statement to make sense, one must remember that stems grow longer only from their tips. This growth point contain cells capable of dividing to produce more cells that can then differentiate into the various types of adult cells. (They are called stem cells in animals such as humans). This region is called the apical meristem.

In the plant drawn, the apical meristem has produced a single, just opened flower. Flowers are genetically limited to parts that are set in size and shape; once they attain that configuration they stop growing. If this is true, then the central axis of the rosette is blocked from growing taller. In order for a plant to expand, it must produce branches from the lateral meristems (found in the upper angle between leaf and the stem to which it is attached). Unlike the initial vertical rosette axis, these branches grow out horizontally and the leaves are produced far apart. Additional flowers can be produced along the sides of these branches in an arrangement (inflorescence) called a raceme. Oh, I suspect it goes without saying that these secondary branches can themselves produce more branches.

David Chipping and I had never seen this plant produce a carpet of color visible from a speeding car until this year. It was a fallow field. The color was so different from anything we had ever seen. We had to stop and take a closer look. It was a carpet of red maids. I suspect that it was able to grow in such profusion due to the drought. All the larger, showier plants were either absent or extremely stunted.

Red maids is a native plant, but it is one that actually thrives with a little human disturbance. For this reason, it
is also classified as a weed, but only a slightly nuisance one.

Some might wonder why I haven’t mentioned to which plant family red maids belong. This is because there has apparently been a recent change. In ALL my “older” reference books this species is listed in the purslane family or Portulacaceae. This family contains miner’s lettuce and the beautiful Lewisias. The old Portulacaceae was easily characterized by its only two sepals and + succulent leaves. But the new Jepson Manual recognizes all the California genera but one (Portulaca – true purslane) that were in the Portulacaceae to be now in the family Montiaceae. None of my plant taxonomy references recognize the Montiaceae so none of them indicate how to distinguish the new family from the old one. A quick perusal of the keys in The Jepson Manual did not yield any obvious distinctions. Why was the Montiaceae separated out? In systematics, any recognized taxon (order, family, genus) should be derived from a single ancestor. Such a taxon is said to be “monophyletic.” However, modern classification procedures called cladistics indicate that the genera of the old Portulacaceae separate into different clusters with different ancestors. Such a group is said to be polyphyletic and is a no-no! Unfortunately many characters used to produce modern classification systems are not readily apparent in the field or even without a well equipped laboratory as they are DNA or physiologically based.

Consistent with its weedy designation, red maids would be expected to be found in disturbed ground. And this is where it is most often found. It is especially common after fires and along trails. And, as mentioned above, it is not adverse to growing in human created fallow fields and other agricultural lands.