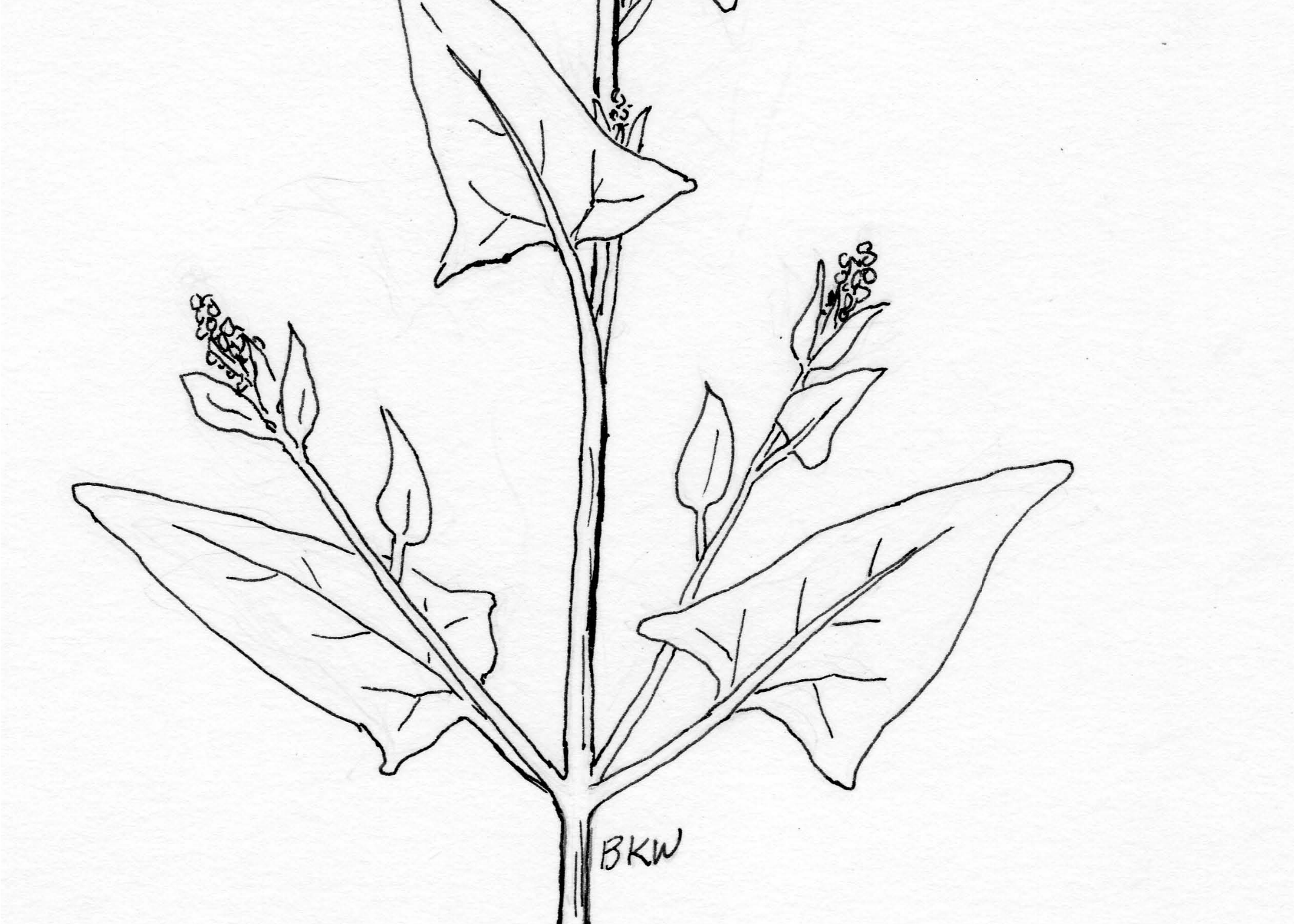 As I write this article, it’s August in the year of California’s third most severe drought. There’s not much out there in bloom. So I’ve retreated to one of the few places where plants are doing anything. Yes, I’m returning to the coastal salt marsh. That is where we found the plant to be featured in this issue of Obispoensis. It’s a plant that generally doesn’t get into wildflower books but does make it into many weed books. This is because it is weedy, widespread, and its flowers are green or brown and tiny and (in our area) fruiting is relatively rare.

The plant is Atriplex patula ssp. hastata or just plain A. patula depending on which plant ID book you’re using. In our area, Atriplex patula may have two subspecies which differ, according to some identification keys, primarily by their leaf shape. Subspecies hastata is the more common and distinctive of the two. Dr. Robert Hoover in his The Vascular Plants of San Luis Obispo County states that A. p. ssp. hastata is very common around the Morro Bay salt marsh. The other subspecies, A. p. ssp. patula, according to Dr. Hoover, is rare in our area. The only location he cites is nine miles north of Morro Bay. Subspecies patula produces leaves that are narrow, oblong or lanceolate; their bases are smooth and rounded and therefore lack any backward projecting lobes or acute projecting angles. The model for this plant grows along the uppermost edge of Morro Bay salt marsh.
You probably won’t get your feet wet if you would like it find it because it grows where it will get inundated only by the highest of tides, if at all. 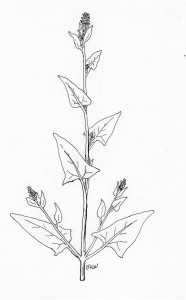 A look at Bonnie’s drawing will show the distinctly arrow-head shaped leaf blades with their conspicuous backward projecting lobes on the outer leaf blade base, making the leaf resemble a spear point or arrowhead. This shape is technically termed “hastate” by botanists. The shape of the leaf gives it its subspecies name. However, if you look again at Bonnie’s drawing, you will see some leaves that are NOT hastate but would be at home in A.p. ssp. patula. I suspect that this is the reason why the new Jepson Manual doesn’t recognize subspecies in this species. It simply refers all forms to the species A. patula.

It is interesting that they retain the common name of spear saltbush or spear orache for all appearances of the species. A word about its leaf arrangement. Most of the descriptions indicate that it is alternate but a look at Bonnie’s drawing will show the plant drawn has paired, opposite leaves prominently displayed. Look at the drawing again, and you will also find alternating leaves as well. The most technical description I found stated “Leaves alternate except the proximalmost.” I’m not sure what “proximalmost” means.

According to The Jepson Manual, it may or may not be a native plant; but a survey of the web leaves little doubt that it is a recent introduction to North America. There are two common coastal salt marsh species of salt bushes found in or near the Morro Bay salt marsh. The other species, A. watsonii or Watson’s salt bush was the plant profiled in the December 2011 issue of the Obispoensis. The two salt bushes can readily be told apart with only a casual glance at their growth patterns. Watson’s salt bush grows in flat mats that can become mounded in the center. Therefore its branches are horizontal and parallel to the ground. Spear saltbush’s branches are vertical and thus can reach a height of a foot or more. Watson’s saltbush rarely reaches a height of 4-6 inches.

Some may have noticed that I have not identified the family to which salt bushes belong. This is because taxonomy texts (and most of the web entries) place it in the Amaranthaceae while The Jepson Manual places it in the Chenopodiaceae.

Classically, before DNA sequence data, salt bushes were placed in the goosefoot family (Chenopodiaceae). When the DNA sequence data and cladistic or phylogenetic classification methodologies became available, it was noted that genera of the mostly temperate zone Chenopods and the mostly tropical family Amaranthaceae came out together but were inconclusively separated in their phylogenetic diagrams.

This raises a question that has been raised many, many times before. What is the purpose of Biological Classification? When mutually exclusive, is its highest purpose to indicate phylogeny (evolutionary relationships) or is it to aid identification (ID)? Obviously it’s best when both purposes are in agreement! The authors of the Phylogeny paper admit that the phylogeny of the genera within two families is somewhat weakly supported, I think the editors of The Jepson Manual came down on the ID side of the question. I’ll leave all of you to determine who is right.