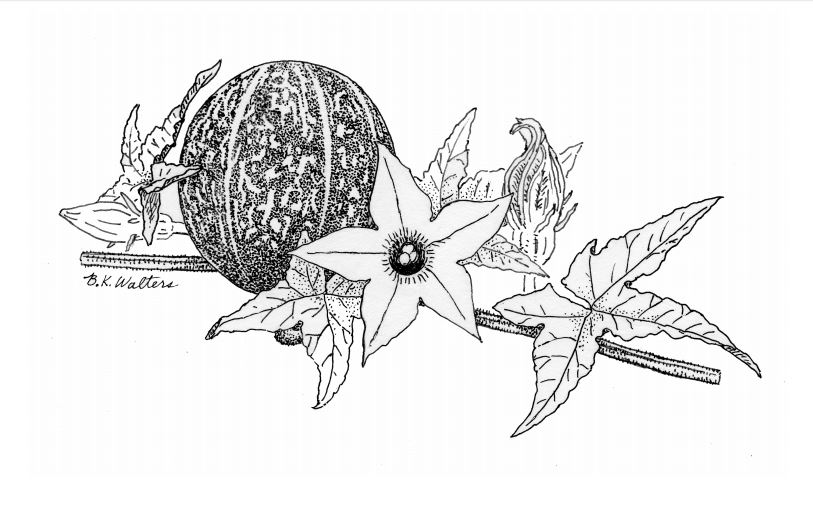 Bonnie’s drawing for this issue of Obispoensis is based on a picture sent to me by George Butterworth. The species, Cucurbita palmata, has many common names. The ones I found on the web include coyote melon, coyote gourd, desert gourd, palmate-leafed gourd, coyote ear, buffalo gourd, stinking melon, calabazilla, or chilicote.

Coyote melon is primarily a desert species that grows best where there are summer monsoons. Since we are a little north of the summer monsoon track coyote melon is relatively rare in our area. However, a few plants can be found in the eastern edge of our Chapter area (i.e., Carrizo Plain and the upper Cuyama Valley). It’s a species that prefers sandy, disturbed soils where vegetation is scarce such as desert washes and dry, rocky slopes.

The most common name around here, coyote melon, refers to its vegetative resemblance to the pumpkin, squash cucumber, melon, or gourd, family Cucurbitaceae. The Cucurbitaceae are non-woody (herbaceous) vines with tendrils and broad, palmate-veined leaves. Flowers in coyote melon are unisexual (staminate or pistilate). In coyote melon they are large and yellow and borne solitarily in the in the axils of leaves. Fruits in the family are extremely variable and are considered unique to the family. Often it is a kind of quite large berry botanists call a pepo. Pepos have fleshy, fibrous, or watery flesh inside and usually are enclosed by a clearly defined outer skin or rind. When totally mature, they often dry out to a hollow dry spheroid.

From the list of common names for the family, I suspect it would be easy to conclude that the family produces a fair number of edible and otherwise useful cultivated species. The main economic species produce edible, fleshy fruit today. But this has not always been true and is certainly NOT true of coyote melon and most other wild members of the family today. The flesh of coyote melon is extremely bitter and if one is tempted to try to eat it, it would act as an extreme emetic. That is, it would rapidly be expelled from both ends.

So what’s the link between inedible and/or poisonous wild cucurbits of today with the edible cucurbits listed above? It is best summed up by a quote from a November 20, 2015 paper by A’ndrea Elyse Messer titled “Loss of Mastodons Aided Domestication of Pumpkins, Squash.” I actually heard (or read) about the article around Thanksgiving and decided to look it up on the Web. The quote that caught my interest was: If Pleistocene megafauna – mastodons, mammoths, giant sloths and others – had not become extinct, humans might not be eating pumpkin pie and squash for the holidays, according to an international team of anthropologists.

The article indicates that most wild cucurbits are bitter and that smaller organisms (and humans) tend to avoid trying to eat the fruit. It then notes that large mammals, such as the mastodon, have fewer bitter taste buds in their mouths so eating cucurbits shouldn’t have been a problem. The authors note that they could deduce that the mastodons were eating cucurbits because when and wherever they examined fossil mastodon dung it contained cucurbit seeds. Since the only way cucurbit seeds could get into dung is by being eaten, they concluded cucurbits were an important food source for them. Being huge animals, mastodons had to migrate over wide distances so they also concluded mastodons were major dispersers of cucurbit seeds. The researchers also found that the DNA they recovered from the seeds in the dung was more similar to wild cucurbits of today than to cultivated edible ones. Therefore it’s logical that the ancestors of the edible cucurbits were bitter.

What killed off the mastodons? A recent book titled, The Sixth Extinction, gives a possible clue. It turns out that large animals live in a very tight balance with their environment and the regular sustained loss of even a few key animals would lead to extinction in a relatively short time (a few thousand years). Early humans coexisted with the last of the mastodons. Early human hunters probably preferred to kill the biggest and healthiest animals as hunters still do today. This would mean they would have taken the breeding animals of a family or herd. When a parent is killed, often the rest of their family dies as well. So even with very modest losses of a few key animals a year, the book indicates it would lead to a slow extinction in a few thousand years.

Mastodons and the other large mammals died out over ten thousand years ago. So why do we have edible cucurbits today? The article indicates that early peoples didn’t use fresh cucurbit fruits for food, but waited until they were dry and hollow and used them for containers, noise makers (rattles) and/or fish floats. Although some species’ seeds (e.g., coyote melon) are edible when totally mature, at least some of their seeds would have ended up in their disturbed, highly nitrogenous trash heaps. So people took over from the mastodons as major seed dispersers. So cucurbits would have been become common around early human settlements. Since a bitter compound is often poisonous in large uncontrolled amounts, but medicinal in small, regulated amounts, it can be assumed that early peoples used fleshy immature fruits as medicine. It doesn’t seem to me to be a great stretch to assume enough genetic variability in early cucurbits so that some would have been less bitter. These would be selectively utilized by early people, probably the wives and mothers.

By the time the mastodons were gone, early peoples would have been planting various cucurbits around their settlements. Once there, they would have been selected to be less and less bitter until we have the edible squash and pumpkins we enjoy today. So next Thanksgiving, remember to thank the mastodons and other large extinct mammals for your pumpkin pie. One final thought, pumpkins and squash were domesticated in the new world and in all likely hood the jack-o-lantern pumpkin was one of the few major crops domesticated within the lower 48 states. Personally, I find coyote melon to be best (and safely) enjoyed as we find it, growing in nature.