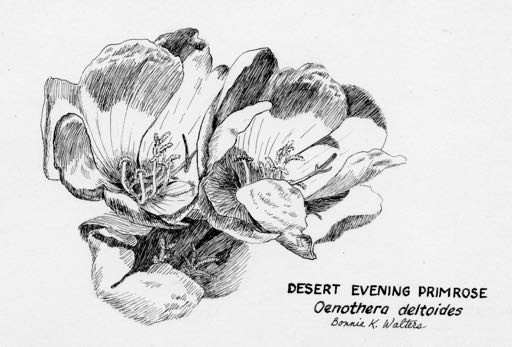 Desert evening primrose (Oenothera deltoides) is in full bloom at Shell Creek as I write this. So it
seemed appropriate to resurrect a drawing Bonnie drew back in 1981. It is one of her earlier drawings since it shows a lot of shading. The flowers are white and the plant starts out as a small mound and then spreads-out across the surface of the ground. It can reach several feet across. Fruits are produced along the full length of the branches. However, if you go to Shell Creek in summer and fall you will probably find little trace of it. This is
because as the branches dry out, they turn upward forming what resembles a largish bird cage. Lastly, the dried plant breaks off and joins the other tumble weeds bouncing around and distributing its seeds.

The species has several common names, including birdcage evening primrose, bird cage plant, basket evening primrose, lion in a cage, and devil’s lantern, or as I’ve been simply calling it, desert evening primrose. As my preferred name implies, it’s found in the deserts, from eastern Washington through California, Nevada, Arizona
and into northern Mexico. The common names that refer to “cages” are references to its bird-cage shape the dried plant takes just before it tumbles away.

According to The Jepson Manual, it has five recognized subspecies. This would be expected by a plant occupying such a large range with so many variations in habitat. It prefers well drained soils so it is very common on desert sand dunes thus another common name is dune evening primrose. In our area it is found in the valleys of the interior Coast Ranges, especially in sandy or well drained soils. The area around Shell
Creek is the most northwestern extent of its range of which I’m aware. At Shell Creek it’s most numerous in the sandy alluvial fan east of Shell Creek.

Some of the people on the Malcolm G. McLeod Annual Shell Creek Field Trip might have noticed quite a few of the flowers were fading, desert evening primrose flowers open in the evening and close up in the morning. That is, their large, fragrant, white flowers are open mostly at night when it’s dark.  The white flowers would make them visible in the twilight and darkness. The flowers are very odoriferous at least in the evening. The large, white, night-blooming, odoriferous traits indicate that the species is pollinated by moths, probably hawk moths.

Before 1969, the genus, Oenothera, was huge and included species given the common names evening primrose for the night blooming ones and sun cups for the day flowering ones. Sun cups and evening primroses share, with other members of its family, Onagraceae, four separate petals. In fact, the flowers of the Onagraceae, have a number of distinctive set of characteristics which makes them easy to recognize. They produce flowers that possess four sepals, four petals, eight stamens, attached to the top of a generally thin, often long tube constructed from the bases of the sepals, petals and stamens (hypanthium). The hypanthium arises from the top of the usually four-parted ovary. This means the ovary is said to be inferior or below all the flower parts. This can be summarized as

CA4 is short for calyx which is the collective term for the 4 sepals; CO4 stand for the corolla, the collective term for the 4 petals. A8 is the abbreviation for androecium, which translates as the “male things” which are the 8 stamens). G4 stands for gynoecium (female thing) which represents the four-parted ovary, style and/or stigma. The circled four indicates that the 4 subunits (carpels) that make up the gynoecium are fused into a single pistil (visual unit of the gynoecium within a flower). The most conspicuous character that separated plants with the common names, sun cups and evening primroses, is the stigma. A look at Bonnie’s drawing will show it to have four hair-like stigma branches. Only true evening primroses (Oenothera) have this trait. The rest of the old, un-split genus Oenothera display a single wide hemispherical cap. At first, all these species were put into the single genus, Camissonia. Unfortunately this is no longer the case as the knob-stigma species are now scattered into several genera with differences of opinion as to how many. One last point, these are EVENING primroses not primroses. I bring this up because a number of web sites left off the evening in the name evening primroses when giving their lists of common names. I know that common names are not regulated, but to call them simply, primroses, I find totally confusing. True primroses are in the totally unrelated family, Primulaceae. The Primulaceae have flower parts in 5’s. That is, they have 5 sepals, 5 fused petals and 5 stamens placed in front of the petal lobes. The ovary is superior and has only a single cavity, not 4, inside. A common weedy member of the Primulaceae is scarlet pimpernel which is a weed in almost all of our gardens. At least it is in those of us who are not great gardeners.