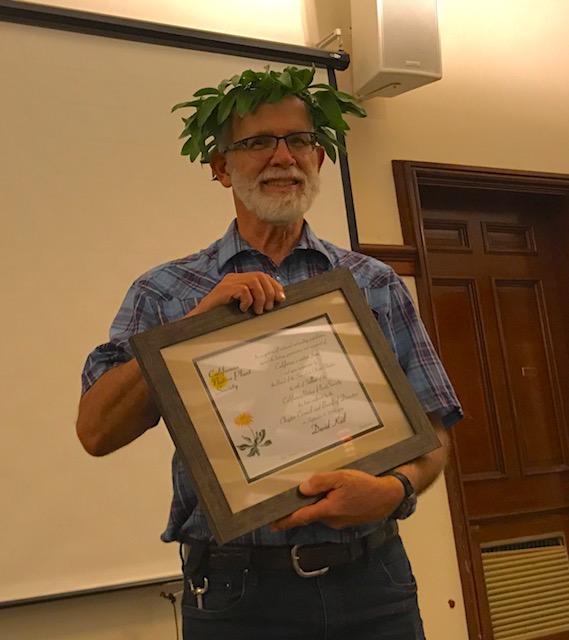 Acting on the nomination submitted by our chapter, the State Board recognized Dr. David Keil as a Fellow of the California Native Plant Society at its September meeting. He has been an active CNPS member; was a Cal Poly botany professor for over 37 years; and, through research and writing, has made significant contributions to California’s native flora.

Dave earned his B.S. in 1968 and M.S. in 1970 from Arizona State University in Tempe, and his Ph.D. from Ohio State University. Dave joined Cal Poly faculty in 1976, and two years later was appointed Director of the Robert F. Hoover Herbarium. His collection totals over 30,000 specimens, most of them housed at the Hoover Herbarium. He joined CNPS shortly after his arrival, and in 1978, served as the Chapter President. In earlier recognition of his generous contributions to our chapter, Dave was the recipient of the 1989 Hoover Award. He has led numerous chapter field trips for the San Luis Obispo chapter, some planned with detailed plant lists, some spur of the moment.

Dr. Keil has also presented chapter meeting programs and workshops on a regular basis. His broad knowledge of the county flora allowed him to surprise those attending with new discoveries, unusual findings, as well as his great slides. For anyone not familiar with county flora, Dave would answer any question. His small workshops conducted before chapter meetings include oak identification, plant collecting, rare plant training and a new grass identification key. In 2009 Dave’s participation on a ‘quick’ CNPS committee to develop a one page tri-fold of common plants for distribution by the City of San Luis Obispo became the 86 page Wildflowers of San Luis Obispo, California. It was an enormous success. As this nomination is being written, he is doing the proof reading on the revised second edition. After Dave’s retirement from teaching at Cal Poly, he was recruited to serve as chapter Vice President and has done so since 2016. He has always been a chapter resource.

At the state level he participated on the Rare Plant Scientific Advisory Committee from 1998 through 2001. Since 2009, he has served as a member of the Fremontia Editorial Advisory Board. From 2014 through 2016, Dave reviewed student grant applications with the Education Program Grants Subcommittee. On an annual basis since 2009, Dave has conducted multi-day plant science workshops on California flora for the State Education Program. For the workshop held in April 2018, Dave watched the county landscapes closely, knowing that the drought was adversely impacting the flora, but he was confident the workshop would be successful, and it was.

In the world of service to botanic science, he had made significant contribution to The Jepson Manual Project. He authored the Key to California Plant Families and served as the editor and primary author of the Asteraceae for both editions of The Jepson Manual. Key writing has always been one of Dave’s strengths, and it is a major part of the long-lasting legacy he has created throughout his career. For the second edition of The Jepson Manual, Dave authored a new key to families that encompasses the major taxonomic revisions that had taken place since 1993 and served as co-editor for the entire manual. His ability to track nomenclatural changes and translate them into meaningful morphological characters in all the major plant families was crucial for the writing of the new family key. Part of what makes Dave’s keys so valuable is that they are written with field botanists in mind, anticipating user misinterpretation on minor characters. This can only be done if the key writer is familiar with every other possible plant, which Dave usually is. Dave has authored over 130 species descriptions mostly in the Asteraceae, but also in the Poaceae and Ranunculaceae. Four taxa have been named in Dave’s honor: Ancistrocarphus keilii Morefield, Erigeron inornatus (A. Gray) A. Gray var. keilii G.L. Nesom, Wedelia keilii B.L. Turner, and Chrysanthellum keilii B.L. Turner.

During his more than 37 years as a professor at Cal Poly, Dave taught courses in general botany, plant taxonomy, field botany and biogeography. He was awarded the university’s Distinguished Teaching Award in 1980. Each year Dave traveled around California with his field botany students, teaching them the elements of California flora. Students have described the course as both the hardest and best course they have taken during their college careers. Classes taught by Dave were often a life changing experience for students. One former student said, “I…was accepted into the ecology program at Cal Poly San Luis Obispo. During my year there, I took Dr. David Keil’s plant systematics class, which converted me from ecology to botany.”

Dr. Keil joins chapter members Dr. Dirk Walters and Dr. David Chipping as Fellows of CNPS. Past Fellows from the chapter include Dr. Malcolm McLeod and Alice and Bud Meyer.