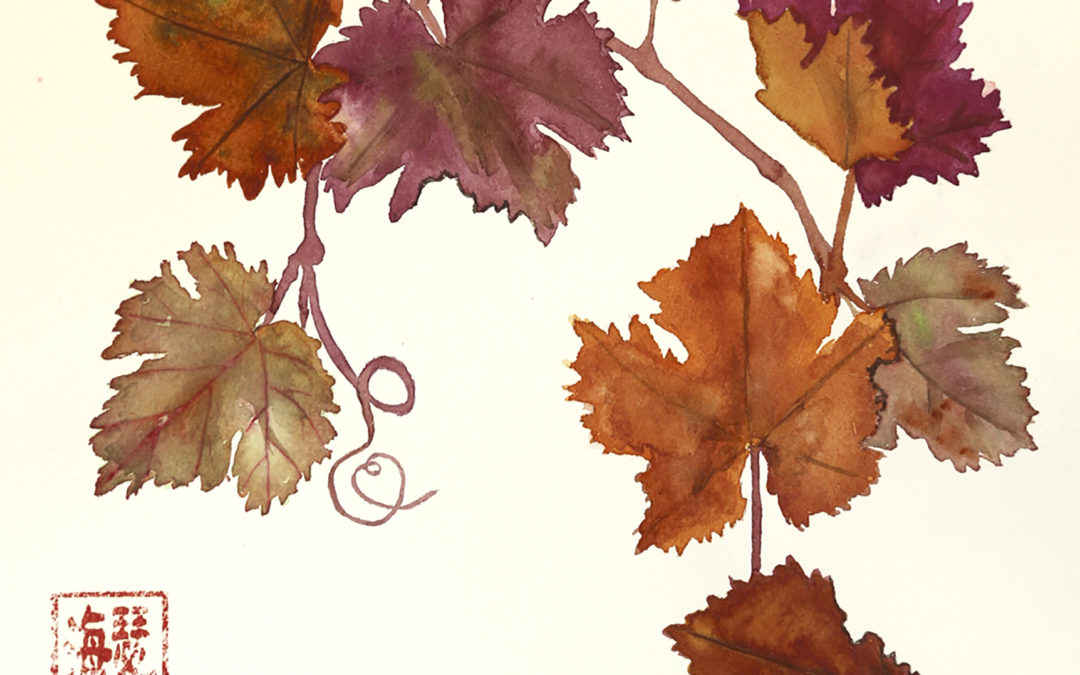 I’m introducing a new artist with this cover of the Obispoensis. The artist is Heather Johnson, who paints beautiful renditions of California native plants, so I asked her if she would allow them to be displayed on the Obispoensis cover. Thankfully, she agreed and has sent me several. I was really taken by the first one I looked at! It was of a leafy twig of the California grape in fall color. California grapes are widespread through Northern California where they favor, but are not restricted to, stream sides. However, I was surprised by Heather showing them having bright red color. If you are seeing the cover in black and white, I recommend that you go to cnpsslo.org and see them in their brilliant red color. The leaf color rendition produced by Heather closely matches the color of the leaves I saw in photos on the Web.

There is a problem with the leaf color however, and trying to resolve it lead me to a very interesting story. This is because the usual fall color of California grape leaves is pale yellow not red. So where did the red come from. It turns out that the entire story of its finding and selection is well known and is worth a google search. In late October 1983, Roger Raiche of the U.C. Berkeley Botanic Garden, first saw a California grape with bright red leaves growing alongside Palmer Creek Road in rural Sonoma County, west of Healdsburg, California. He collected cuttings, rooted them in the green house and finally planted them out in the botanic garden. They grew easily and with minimal care and little water. Later he gave cuttings to a garden volunteer who was also a member of the local California Native Plant Society Chapter. She donated a flat of them to her  CNPS Chapter’s plant sale. She labeled the flat simply “Roger’s red grape.” When those plants were sold, the name was born, although the cultivar ‘Roger’s Red’ has never been registered or patented.

So far we find we have a cultivar with very unique fall color that was found growing wild. But, we still haven’t discovered the origin or the red color. It turns out careful observation of the cultivar ‘Rogers Red’ indicated that it’s not pure Vitis californica and that it shared characteristics with the European wine grape (Vitis vinifera). Further observations limited the possible ancestor to a particular variety of commercial vine grape commonly grown for its reddish fruits. The red fruits of this variety were used to add extra color to red wines. This variety was and still is Vitis vinifera ‘Alicante Bouschet’ and has been grown in California for years. As well as reddish fruits, this variety of wine grape produces bright red leaves in the fall. Enter DNA to the story. Several DNA studies proved that the cultivar ‘Roger’s Red’ is truly a hybrid between the native California grape and the European wine grape Vitis vinifera var. Alicante Bouschet.

This California native (hybrid) is extremely popular and is widely available at nurseries and probably CNPS native plant sales around the state. It’s easy to grow and tolerates many different soils, watering regimes and different levels of shade. Its major fault might be its rapid, aggressive growth. It will require taming. Its fruits are edible, but the seeds are large and the flesh is thin. Not a great ‘eat-off-the vine’ fruit but they can be turned into a nice drink.