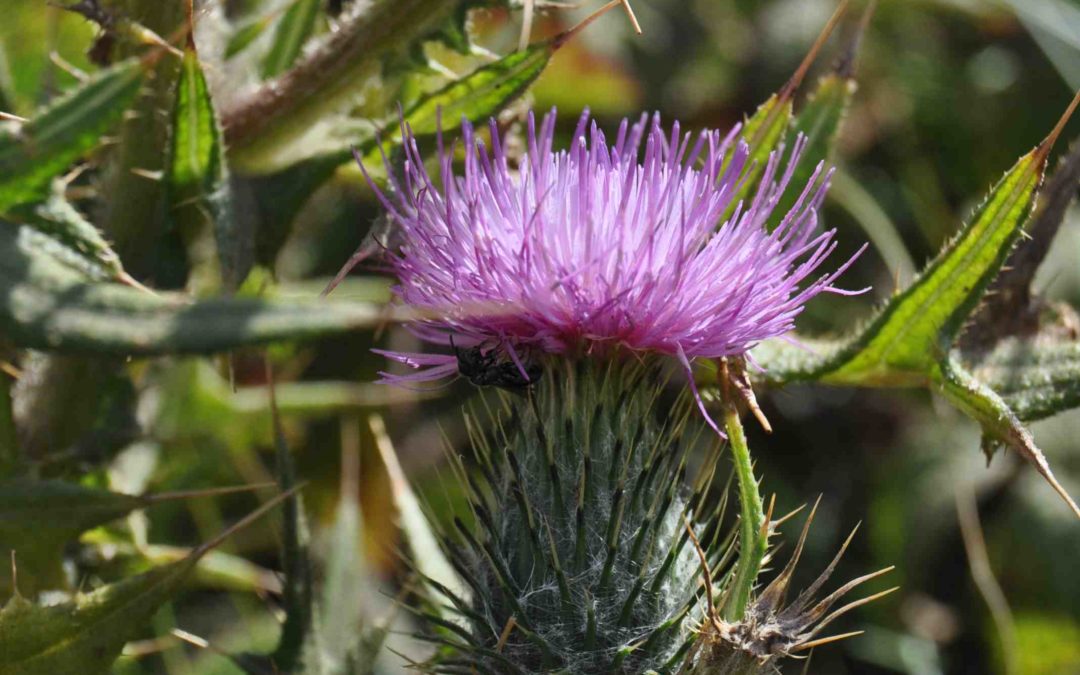 A member of the Asteraceae family, bull thistle is an annual herb native to Europe and is widespread in California and listed as a noxious weed in Colorado, New Mexico, Oregon and Washington. It is found in every state in the U.S. and on every continent except Antarctica. It is a problem in some natural areas such as Yosemite National Park, California. It might have been introduced to eastern North America during colonial times, and to western North America in the late 1800s. Bull thistle is the most common and widespread of pasture and rangeland thistles in western North America. It is also found in disturbed areas such as forest clearcuts, and along roads, riparian areas, and fences. Plants can form dense thickets, displacing other vegetation. The spiny nature of the plant renders it unpalatable to wildlife. Bull thistle is usually a biennial, but can be monocarpic (flowers and seeds one time) and die. It forms a deep taproot and prefers
fertile, well drained soils and grows to 3 to 4 ft. tall. In the juvenile phase, individual bull thistle plants form a single rosette to 3 ft. in diameter. Stems have spiny wings with many spreading branches, and sometimes a single stem. Leaves are 3 to 12 inches long, deeply lobed with coarse prickly hairs on top and woolly underneath. Lobes are tipped with stout spines. Bull thistle flower heads are pink-magenta, to 2 inches in diameter, to 2 inches long, usually solitary, or clustered at the ends of shoots and branches. Large spiny bracts (modified or specialized leaves) surround the seed heads. Bull thistle fruits are achenes (a simple dry fruit), 1/16th-inch long, with a long, hairy plume that is easily detached. Plants can produce up to 300 seeds per flowerhead, with 1 to 400 flower heads per plant. The seed bank is very short lived on the surface but may last 3 years if buried. The key to successful management of bull thistle is to prevent seed production. Seedling and rosette growth stages are the most logical to target for control efforts.