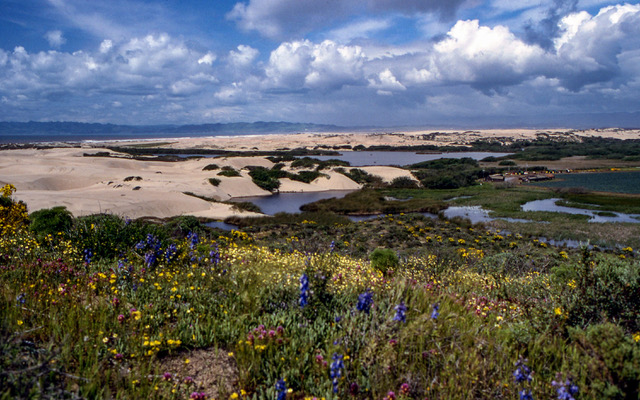 Everyone’s been to the beach, yes. But how much have we looked around to see what vegetation patterns are there to greet us? San Luis Obispo County dunes, and the Oceano dunes surrounding Oso Flaco Lake in particular, are awesome places that are full of rare plants and at least three rare natural communities, as defined by the Manual of California Vegetation (Sawyer, Keeler-Wolf and Evens, 2009). Let’s explore them. And remember, we give these communities names only to make it easier for ourselves to talk about them. We draw lines around them as we see them repeating in nature, but plants don’t always adhere to our neat little coloring books and boxes. There is really a continuum in vegetation; we separate areas mostly for our own convenience.

Closest to the beach, but not actually on the beach, are what are called dune mats, the Abronia latifolia-Ambrosia chamissonis Herbaceous Alliance and its associations. Some of you may know this as central or southern foredunes (Holland’s Preliminary Descriptions of Terrestrial Natural Communities of California, 1986), others as pioneer dune communities (Holland and Keil’s California Vegetation, 1995). In this community, sand verbena and beach bur-sage are characteristically present. It has a global ranking of G3 and a State ranking of S3, meaning it has less than 21-100 viable occurrences, or occupies a certain rather small area. Dune mats are characteristically found on small hummocks in between sandy areas within about a quarter mile of the surf zone. You might also see sea rocket and the invasive European beachgrass here. Rare plants found here include the surf thistle (Cirsium rhothophilum) and beach spectaclepod (Dithyrea maritima).

Remember that dune communities exist in an unstable environment, with frequent winds, salt spray, and shifting sands. As mentioned above, the communities also shift and sometimes blend into each other. And in extremely protected areas in between the hummocks we often find dune swales containing wetland vegetation. We’ll save those wetland types for another time, but let’s move on to another upland dune community.

Inland from the foredune community and on slightly more stable soils, we find silver dune lupine-mock heather scrub, the Lupinus chamissonis-Ericameria  ericoides Shrubland Alliance and its associations. Again, this community has other names such as central dune scrub (Holland 1986, referenced above), and dune scrub communities (Holland and Keil, 1995). Hoover’s Vascular Plants of San Luis Obispo County, 1970 refers to these areas as coastal sand plains. In this community, either silver dune lupine or mock heather is “conspicuous.” This community also has a ranking of G3 S3. This community can extend far inland, to almost 3 miles (U.S. Fish and Wildlife Service, 2016). Here you might also see sea cliff buckwheat, California poppy, and occasionally, giant coreopsis (now Leptosyne gigantea), which blends into the next community. If you’re lucky you might find the den of a burrowing owl here, or even see an owl. Rare plant species found here include Blochman’s leafy daisy (Erigeron blochmaniae), dune larkspur (Delphinium parryi ssp. blochmaniae), and Kellogg’s horkelia (Horkelia cuneata ssp.sericea). 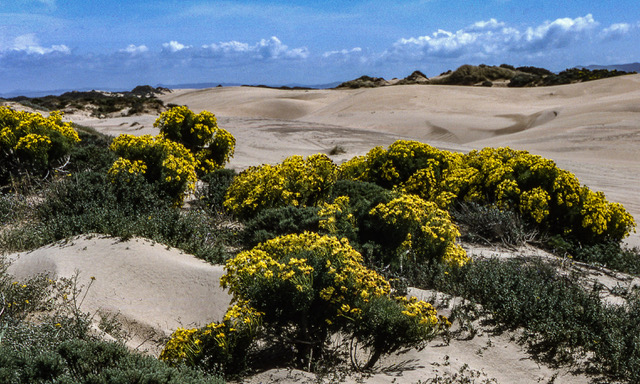 South of Oso Flaco Lake is a very rare natural community that many of us have visited and know its location well as Coreopsis Hill. Did you know that the community is called Giant coreopsis scrub? Its official name is Coreopsis gigantea Shrubland Alliance, but as we all know, the major dominant plant species, giant coreopsis, has had its name changed to Leptosyne gigantea. (But note that Leptosyne gigantea is not considered a rare plant.) In our area, this community inhabits the stabilized backdunes, but further south it occurs on bluffs immediately along the edge of the coastline. This community is ranked G3 S3 and is also considered sensitive. According to the Manual of California Vegetation, wherever the giant coreopsis occurs at greater than 30 percent relative cover, we can call the community giant coreopsis scrub. It typically co-occurs with Ericameria ericoides, Artemisia californica, and other dune-lupine-mock heather scrub species. Coreopsis Hill is its northernmost natural occurrence. This is the community shown on our front cover this month. These are only three of our rare natural communities that inhabit dunes along our coastline. Again, it is important to point out that there are variations and subdivisions within these types; these are called Associations. Some associations have been identified and classified; others have not. This means there is more work for our Plant Communities committee to do!