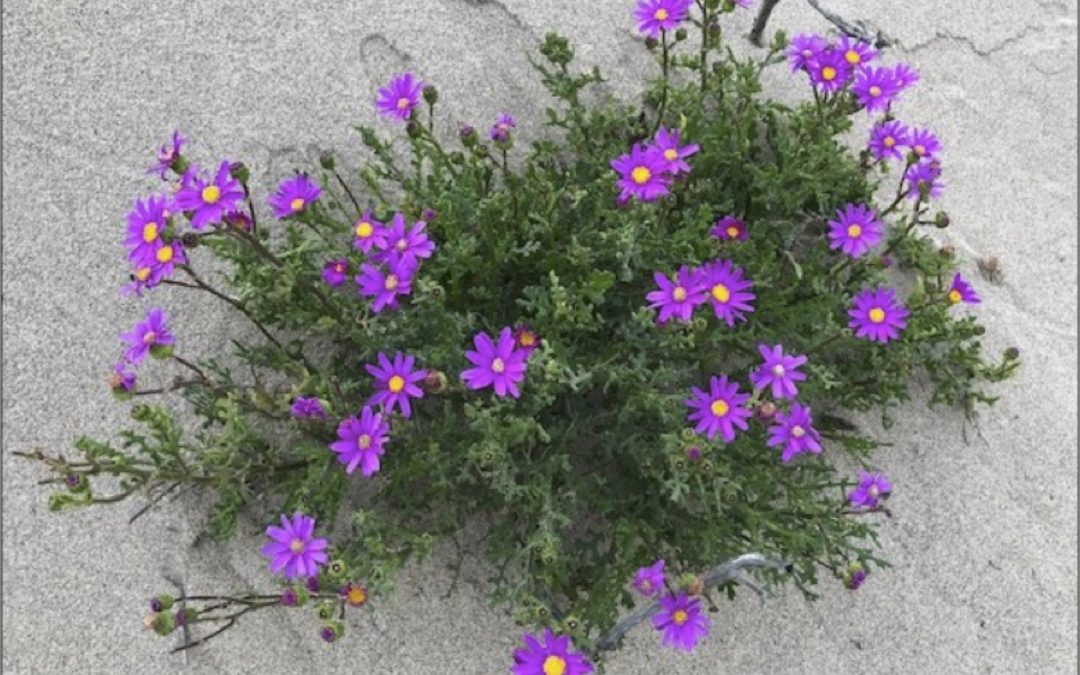 An attractive member of the Asteraceae (Sunﬂower) family Senecio elegans is an erect annual herb, up to 1 ft. tall and to 1.5 ft. wide. It is native to Southern Africa and is distributed along coastal California. In northern San Luis Obispo County there are groups at San Simeon Point and at the other end of the county in the Guadalupe-Nipomo Dunes. Local CNPS members have located them in the Dunes as follows–1984: Hidden Willow Valley by Malcolm McLeod and Austin Grifﬁths; 1986: Kathleen Jones; 1990: south of Oso Flaco Lake by Lynne Dee Althouse and David Keil. Germinating following rainfall, leaves have blades which are deeply cut (pinnately lobed), into several toothed lobes and are sticky to the touch. The spectacular fuchsia colored, daisy-like inﬂorescence bears ﬂower heads lined with black-tipped phyllaries (leaf-like plant part located just below a ﬂower). They contain many (100+) deep yellowish disc ﬂorets at the center. Each has 13+ fuchsia colored ray ﬂorets. The ﬂower heads turn into ﬂuffy white seeds, ready for the wind to disperse the seeds. Senecio elegans is an escaped invasive weed where it spreads rapidly, displacing indigenous vegetation such as Dunedelion (Malacothrix incana). Control is achieved by pulling it before ﬂowering. I’ve been able to easily pull many hundreds in the Dunes south of Oso Flaco.