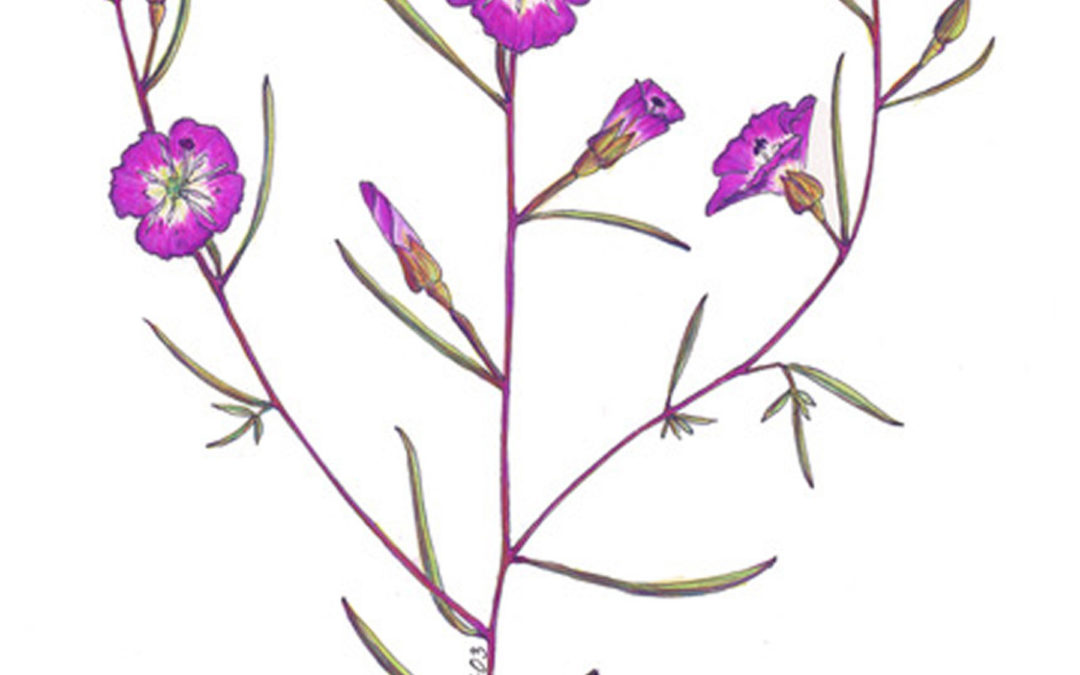 I chose the Pismo clarkia because it grows in the area surrounding Mardi’s home and nowhere else. It grows naturally in about 20 occurrences from the southern Edna Valley, south through the foothills and valleys of the Southern San Luis Range, ending east of Pismo Beach and Arroyo Grande (Huasna Valley). END_OF_DOCUMENT_TOKEN_TO_BE_REPLACED

Why Grow Natives from Seeds?

You have probably wandered the nursery isles looking for the ever more popular native plants being sold. Do you ever consider how those plants have been propagated? Many, if not most, native plants in the nursery trade are propagated by cuttings. The nursery person knows what the plant will look like and behave like. And END_OF_DOCUMENT_TOKEN_TO_BE_REPLACED 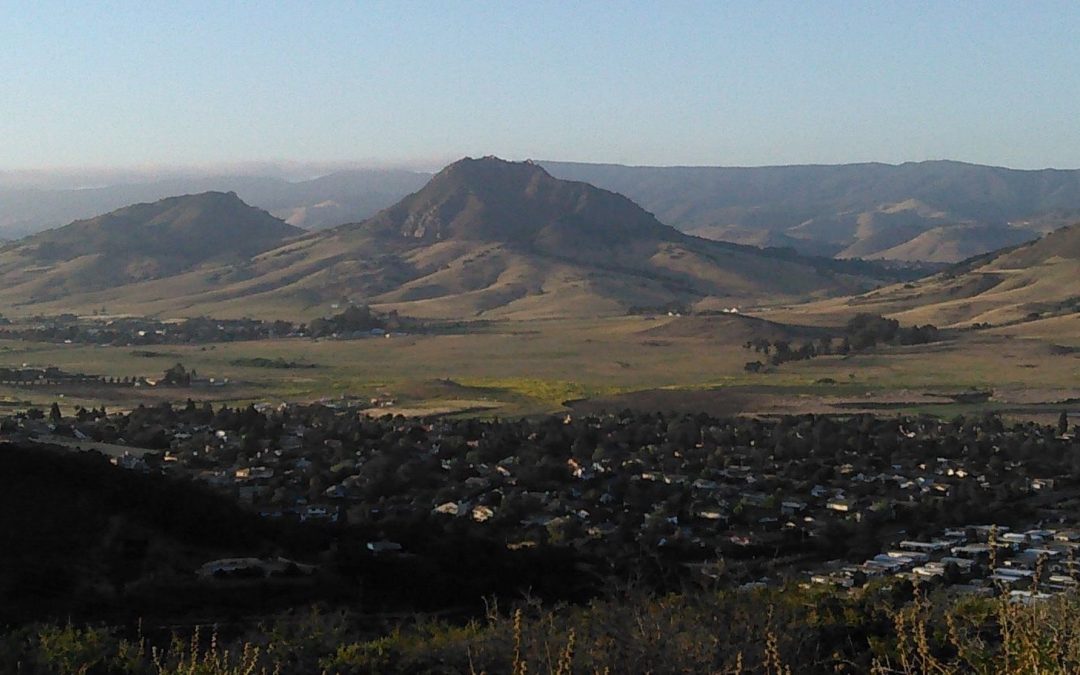 Five of the Morros of San Luis Obispo County

Join us for a day on the Morros and learn which plants grow on each of these volcanic plugs.  Ascend one, two, or more. Here are the start times. END_OF_DOCUMENT_TOKEN_TO_BE_REPLACED

2018 has been a surprisingly good year for spring wildﬂowers. Except for the January deluge and some good March storms, this has been a fairly dry year. In late September, 2017, several spot ﬁres burned along Rucker Rd. just north of Mission Hills near Lompoc, California. In spite of sparse rainfall, there has been encouraging END_OF_DOCUMENT_TOKEN_TO_BE_REPLACED 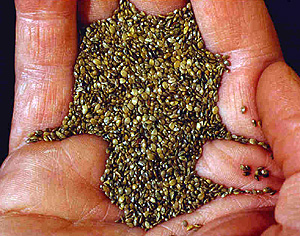 I know it seems too early to be thinking seeds. Many of my plants are just starting to bloom. I just wanted to remind those who are interested that the seed exchange is going to take place ate the October meeting before the main program. Let a few of your garden native plants go to seed and bring the seed to the seed exchange. More information will follow in newsletters to come. There is information on seed collection available on the cnpsslo website under the resources/growing natives tab (link). Marti Rutherford

The other day, while checking out at the grocery store, the cashier noticed my CNPS hat and asked me, “How do you become an environmentalist?” I thought for a moment and then I told him “I would start at home.” END_OF_DOCUMENT_TOKEN_TO_BE_REPLACED 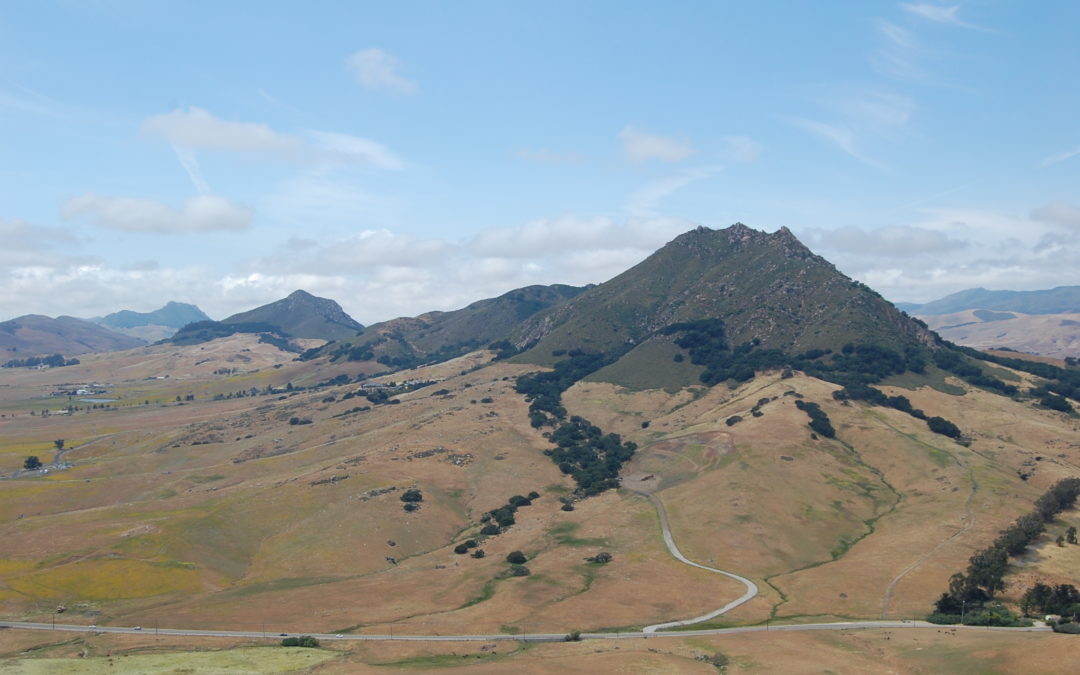 Plant Associations and the Geology of the Morros

This photograph, taken from Cerro San Luis, shows Bishop Peak, Cerro Romauldo, and in the misty distance, Hollister Peak. The hills on the extreme left margin of the picture are the serpentinite ridge that backs Cuesta College, and the hills of the extreme right right margin are the western portion of West Cuesta Ridge. One of the obvious visual features is the dark chaparral scrub of the peaks, and the brown of the late spring grasses END_OF_DOCUMENT_TOKEN_TO_BE_REPLACED

At the San Luis Obispo city Planning Commission meeting of Jan. 24 regarding the proposed continuing care facility known as Villaggio at the Froom Ranch, several commissioners wondered aloud if the project was not “a good project in the wrong place.” This came after a presentation that showed the project seeks removal of several important environmental constraints that constitute a grant of special privilege to the project sponsors. What are these constraints? What do the project sponsors seek? And how are these removals “special privileges”? END_OF_DOCUMENT_TOKEN_TO_BE_REPLACED 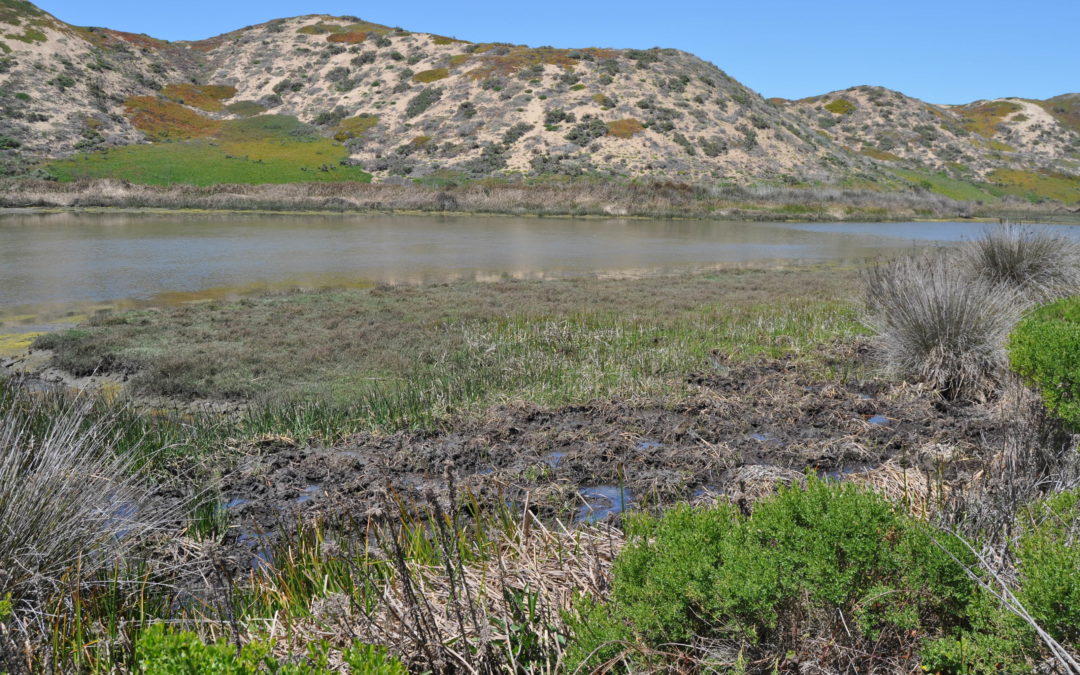 Wild pigs are again active in Morro Bay, causing damage while rooting for the tuberous reeds in the brackish freshwater seep zones close to the high tide line. This time they are at Shark Inlet. We last saw them in 2015 on both sides of the South Bay Boulevard bridge, and neither of the locations appear to have recovered. END_OF_DOCUMENT_TOKEN_TO_BE_REPLACED

From time to time, our chapter has talked about creating a Wildflower Alert.  Well, there is a healthy display of wildflowers this year along the new ridge trail in the Reservoir Canyon Open Space near San Luis Obispo.  From the parking lot (see map), walk along the road for 100 ft., through the fence opening on the right, and then over the new bridge at the falls.  Once across the bridge, bear right and start up the hill.  Pictured here below are some of the flowers seen the weekend of April 21st, 2018. Link: http://gis.slocity.org/Documents/TrailMaps/rescanyon_bowdenweb.pdf

As someone once said “ Let’s start from the beginning.” Horticulture deﬁned: the science and art of growing fruits, vegetables, ﬂowers and ornamental plants. Native California plants, more or less, fall under the ﬂower and ornamental plant category, though some are eaten as fruits and vegetables. END_OF_DOCUMENT_TOKEN_TO_BE_REPLACED 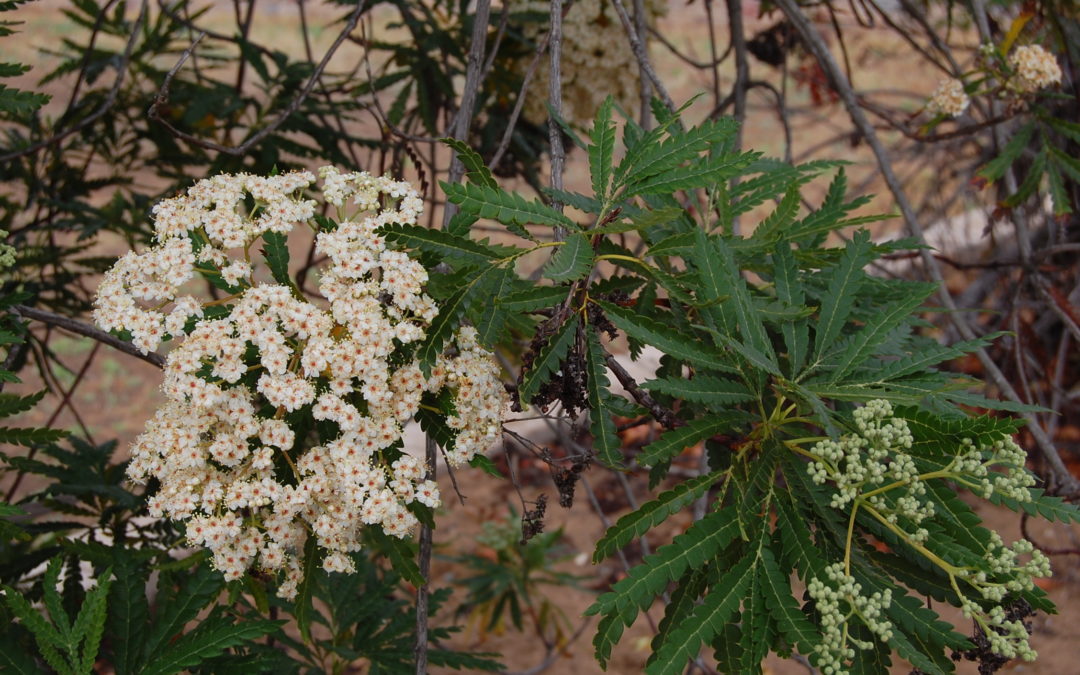 Lyonothamnus ﬂoribundus ssp. aspleniifolius is a mouthful to say but there is nothing edible about this tree. Lyonothamnus is endemic to the Channel Islands of California, where it grows in the chaparral and oak woodlands of the rocky coastal canyons. END_OF_DOCUMENT_TOKEN_TO_BE_REPLACED

Here are some of the activities in which the SLO Chapter is involved that are often missed.  Is there something here that excites you?  If so, follow your passions – get involved! Ailanthus altissima is in the Quassia family. It is native to China. It grows in disturbed areas including riparian areas and may tolerate extremely harsh conditions. It forms dense thickets that outcompete native vegetation and reduce wildlife habitat. The female trees produce fruit at several years of age. One tree can produce 325,000 seeds or MORE annually! However, it does not produce a consistent seed bank. Tree-of-heaven also reproduces vegetatively from creeping roots. New shoots can sprout up to 50 ft. away from the parent tree. It is present in many places in San Luis Obispo County, especially riparian areas. It is difficult to control. Tarping seedlings may work. Small trees can be weed wrenched. The whole plant has to go: stump and roots. Ideally a chemical application on a cut stump should consist of 20% Garlon 4 Ultra with 80% crop oil.

Our chapter wrote to the California Coastal Commission to support an appeal against the illegal approval by SLO County of a subdivision of a large lot situated is an area mapped as ESHA (Environmentally Sensitive Habitat Area) immediately adjacent to the Dept. of Fish and Wildlife’s Morro Dunes Preserve in Los Osos. The Coastal Plan specifically prohibits subdivision in ESHA. The site supports Morro manzanita, and is occupied by Coastal Dune Scrub, a rare plant association.
David Chipping 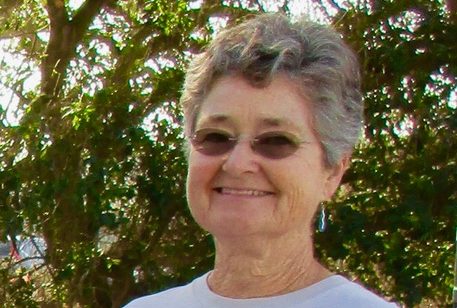 The Hoover Committee selected Marti Rutherford as the 2017 Honoree for the significant contributions she has made to our chapter. She has volunteered in many ways to promote the education and conservation of native flora in our county. Marti is an observant person with a true curiosity about plants and plant communities. Her interest in better knowing native plants inspires her passion for collecting seed and experimenting with propagation. The plants she grows bring her enjoyment, which she happily shares with our chapter and the larger community. END_OF_DOCUMENT_TOKEN_TO_BE_REPLACED 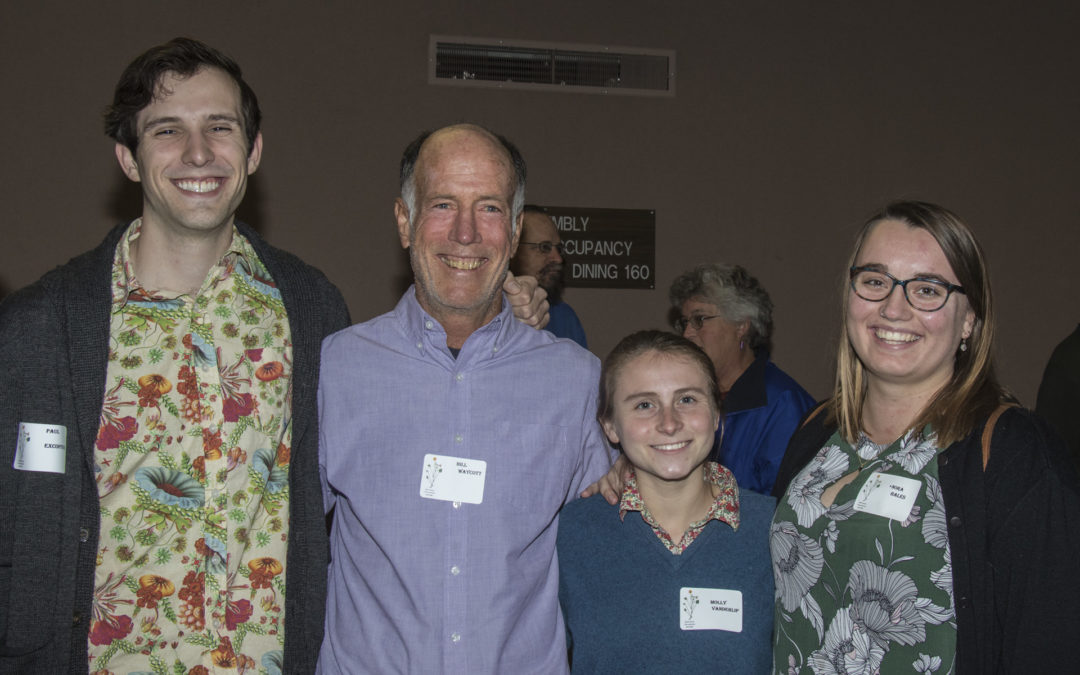 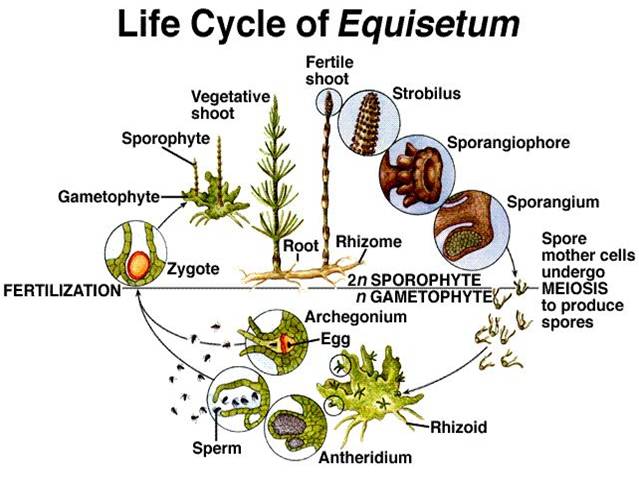 While volunteering a few weeks ago in the CNPS co-sponsored San Luis Creek restoration project with the City of San Luis Obispo, several of us were removing weeds and planting natives along both sides of the creek in front of the Old Mission Church. This project is now entering its third year with nearly 200 native plants placed in this scenic landscape.

While working on the creek bank a few weeks ago, I noticed a number of shoots of giant horsetail, Equisetum telmateia, emerging on the END_OF_DOCUMENT_TOKEN_TO_BE_REPLACED

With the lack of rain, everybody is wondering what to do in regards to irrigation. As we remember from Richard W. Halsey, our 2018 banquet speaker, California native plants generally receive rain during the months of November through April. However at this juncture, mid-February 2018, we currently have a deficit of 4 to 6 inches in rainfall. Due to this unusual lack of precipitation I’m recommending, if you can afford it, to water your oaks and other California native plantings.

A Rain Bird sprinkler puts out 120 gallons in 30 minutes, this would be equivalent to about a quarter inch of rain. At this point, you would need to water for 8 hours with a Rain Bird to catch up to normal rainfall for mid-February. Of course that would be very expensive and I’m not recommending you do that. However, any extra water that you can apply to your landscape including gray water would be very beneficial. 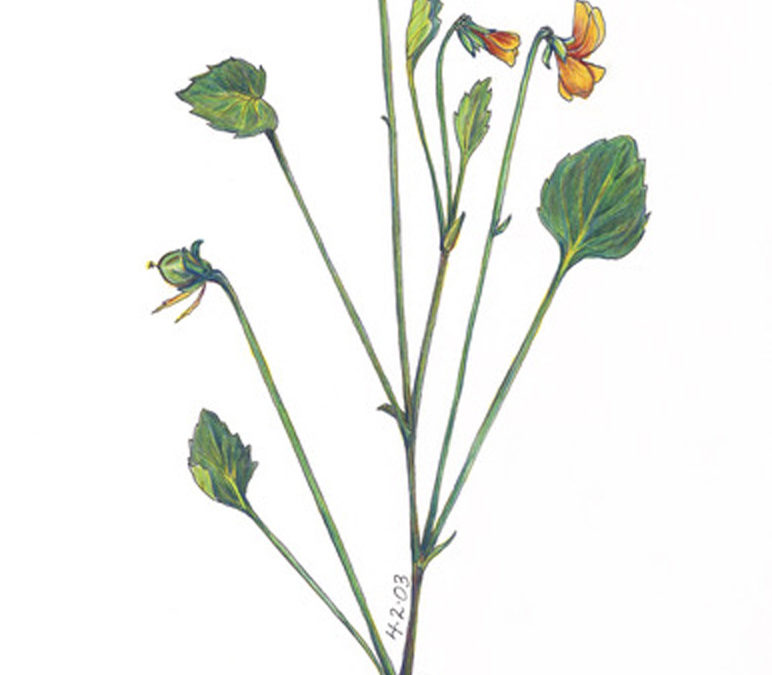 This botanical illustration was created by Mardi Niles using a Micron 005 #1 Archival Ink pen and Prismacolor Verithin colored pencils on Bristol Regular paper. It will be the first of several beautiful pieces of native plant art by Mardi you will be seeing on our covers into the near future.

Viola pedunculata is widespread throughout the coastal portion of our chapter area. It extends inland as far as there is enough moisture. Dr. Hoover reports that it is apparently absent from the desert portions of our county such as the Carrizo Plains. It is always a visible treat END_OF_DOCUMENT_TOKEN_TO_BE_REPLACED